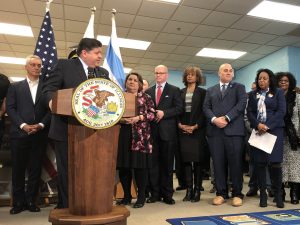 Gov. J.B. Pritzker speaks during a ceremony Jan. 17, 2019, in Chicago marking the signing of a bill requiring anyone who holds a federal firearms license to also obtain a state “certificate of license” and comply with state regulations. Those regulations, with modifications made over the past year, were scheduled to go into effect Jan. 17. (Credit: @GovPritzker on Twitter)

New rules governing how retail gun dealers do business go into effect Friday, Jan. 17 and include the types of records they must keep, how weapons and ammunition are to be stored and the kinds of video surveillance and security systems they must maintain.

The rules, established by the Illinois State Police and scheduled to be published in the Illinois Register on Friday, will go into effect almost one year to the day after Democratic Gov. J.B. Pritzker signed the Firearm Dealer License Certification Act into law. The Act requires firearm dealers who have a federal firearm license to also obtain a state certificate and comply with state regulations.

Pritzker signed the bill, the first of his administration, after it passed during the 2018 legislative session. Republican Gov. Bruce Rauner was in office when it passed, but Democratic Senate President John Cullerton used a procedural maneuver to hold onto the bill because Rauner had vetoed similar legislation that spring.

The bill was viewed at the time as a response to rising gun violence in parts of Illinois, especially Chicago. It was aimed at preventing theft or other diversion of guns from firearms dealers and to crack down on so-called “straw purchases” in which someone buys a gun on behalf of someone else who is legally prohibited from owning a gun.

ISP initially proposed administrative rules in August and held a public hearing on Oct. 24 in Springfield. But those proposed rules sparked fierce pushback from gun dealers around the state who said compliance would be excessively expensive.

Of particular concern was a proposed rule that would have required dealers to maintain video surveillance at several points in their stores. Dealers would have also had to maintain those recordings for 90 days and back them up to an offsite storage system such as a cloud or server.

“I know stores that have over 125 cameras in there,” said Todd Vandermyde, executive director of the Federal Firearm Licensees of Illinois, a gun dealer trade association. “You’re not requiring a backup system, you’re requiring a backup generator.”

He went on to describe the rule as requiring such a dealer to be able “to upload 125 high-definition Netflix movies simultaneously.”

Gun dealers also complained about other proposed rules that would have required them to have written plans for storing all inventory, both during business hours and after closing, and to keep ammunition in a restricted area of the store not accessible to customers. Some gun shop owners said compliance would be impossible.

“Hundreds of dealers have paid $1,500 license fees, confident that they could meet the letter of the law, and now they find that they can’t because of the rules that have been proposed,” Valinda Rowe, spokeswoman for gun rights advocacy group IllinoisCarry.com, said during the hearing.

Following that hearing, ISP revised many of the proposed rules, eliminating the requirement for backup storage of video surveillance, according to a copy of the rules provided by ISP. But that pushed the rulemaking process beyond Jan. 2 when gun dealers were to come into compliance with many portions of the new law.

As a result, ISP is using its emergency rulemaking powers, which allow regulatory agencies to put rules into effect immediately, for a maximum of 150 days, while final rules are being drafted. Those proposed final rules could be subject to another public hearing, further revision, and review by the General Assembly’s Joint Committee on Administrative Rules (JCAR).

The law is also the target of a lawsuit filed by the Illinois State Rifle Association, as well as several gun shops. Plaintiffs argue the law places “onerous restrictions” on firearms dealers that would force many stores to close and others to pass the higher costs on “to those who would be seeking to exercise their constitutional right to keep and bear arms.”

That lawsuit is pending in Sangamon County Circuit Court.