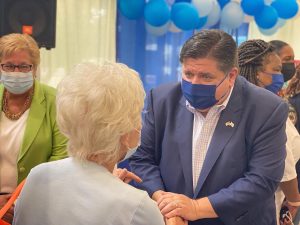 Gov. J.B. Pritzker talks with some visitors at Senior Day at the Illinois State Fair on Monday, Aug. 16. (illinois.gov)

SPRINGFIELD – With the ongoing Illinois State Fair as a backdrop, Gov. J.B. Pritzker signed several bills into law in recent days during ceremonies that coincided with daily fair themes.

On Monday, Aug. 16, which was Senior and Scout Day at the fair, Pritzker signed a package of bills aimed at improving health care for seniors, including those suffering from Alzheimer’s and other forms of dementia.

“I am excited to sign four pieces of legislation that will make Illinois an even safer state for seniors,” Pritzker said at the signing ceremony. “Together, the steps we’re taking today mark a bipartisan commitment to ensuring that Illinois seniors can live their best lives.”

Senate Bill 677, by Sen. Ram Villivalam, D-Chicago, and Rep. Kathleen Willis, D-Addison, requires all health care workers with a continuing education requirement as part of their license take at least a one-hour training course each renewal period on the diagnosis, treatment and care of patients with Alzheimer’s disease and other dementias. That new requirement takes effect Jan. 1, 2023.

House Bill 3147, by Manley and Sen. Tom Cullerton, D-Villa Park, addresses an issue that arose during the pandemic when patients in long-term care facilities were unable to communicate with family members due to lock-downs of those facilities. It requires those facilities to make “every reasonable effort” to facilitate at least one phone call or video call with a family member each day during a governor-declared disaster. It took effect immediately.

And House Bill 2570, by Rep. Dan Brady, R-Bloomington, and Sen. Omar Aquino, D-Chicago, allows drivers over age 55 to qualify for automobile insurance rate reductions by taking an online defensive driving course or accident prevention course, rather than an in-person course.

“The past year has been challenging for all of us, but especially for older adults,” said Paula Basta, director of the Illinois Department on Aging. “This package of legislation is about respecting yesterday, supporting today, and planning for tomorrow.” 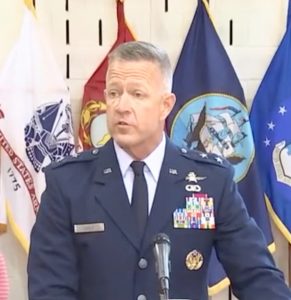 Maj. Gen. Rich Neely, commander of the Illinois National Guard, speaks Sunday, Aug. 15 at the Guard Headquarters in Springfield prior to the governor signing several pieces of legislation designed to improve service for military members and their families. (illinois.gov)

Monday’s signing ceremony followed a similar ceremony Sunday, which was Veterans and Gold Star Families Day at the fair, during which Pritzker signed several bills dealing with services for military veterans and their families.

House Bill 1290, by Rep. Joyce Mason, D-Gurnee, and Cullerton, amends the definition of “honorable discharge” for purposes of qualifying for state veterans benefits to include any type of discharge other than honorable if the only reason why they were discharged was due to their sexual orientation or gender identity.

According to the governor’s office, an estimated 13,000 enlisted members of the LGBTQ community were discharged under the military’s now-defunct “Don’t Ask Don’t Tell” policy.

House Bill 2776, by Rep. LaToya Greenwood, D-East St. Louis, and Sen. Christopher Belt, D-Swansea, provides for expedited licensing of service members or their spouses who hold professional licenses in other states and are stationed or deployed in Illinois. It requires the Department of Financial and Professional Regulation to process those applications within 30 days of receiving them, rather than within 60 days after submission. It also updates statutes about licensure requirements.

House Bill 3865, by Rep. Mark Walker, D-Arlington Heights, and Sen. Michael Hastings, D-Frankfort, requires private companies that provide military benefit services to disclose that the benefits are available without charge. It also makes it unlawful under the state’s Consumer Fraud and Deceptive Business Practices Act to fail to make the required disclosure, fail to comply with fiduciary responsibilities under federal law, or to charge fees in violation of federal law.

Senate Bill 505, by Hastings and Rep. Dave Vella, D-Rockford, provides that members of the Illinois National Guard serving on state active duty, in addition to those serving in a federal duty or in training status, shall have a state flag presented to their next of kin upon their death.

Senate Bill 2089, by Belt and Greenwood, requires the Department of Natural Resources to fly POW/MIA flags, in addition to the United States and Illinois flags, at all state parks, effective Jan. 1, 2022. It also requires the department to have flags at all national parks in the state within five years of the effective date.

House Bill 1915, by Rep. Michael Marron, R-Fithian, and Sen. Scott Bennett, D-Champaign, allows the Illinois Department of Veterans Affairs to create a “Fold of Honor” decal for state license plates to benefit the Folds of Honor Foundation, a nonprofit organization that helps provide educational scholarships for the families of fallen and disabled service members.

And House Bill 2984, by Rep. Randy Frese, R-Paloma, and Sen. Jil Tracy, R-Quincy, establishes the first Saturday in May as “Veterans Gardening Day,” to honor and remember veterans.