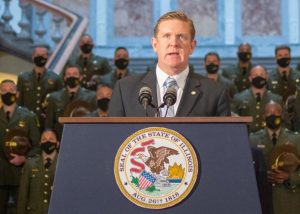 SPRINGFIELD – Seventeen crashes involving Illinois state troopers or their vehicles have occurred in 2021 as a result of violations to the state’s traffic law known as “Scott’s Law.”

Gov. J.B. Pritzker signed a new law Thursday, Aug. 12, Senate Bill 1913, allowing judges to issue community service among other penalties to those violating the law, which requires drivers to slow down and change lanes when there is a first responder present with flashing lights stopped on the roadway. The measure was sponsored by Sen. Julie Morrison, D-Lake Forest, and Rep. Janet Yang Rohr, D-Naperville, and will take effect in January.

Pritzker was joined by a bipartisan group of lawmakers and members of the Illinois State Police for the bill signing. All participated in a silent prayer for Chicago Police Officer Ella French, who was shot to death during a traffic stop this week, and her partner who remains hospitalized with gunshot wounds from the attack.

The governor also signed a bill clarifying the scope of Scott’s Law and one creating a database of mental health programs for first responders. All three measures passed the General Assembly with unanimous bipartisan support.

“This is a wake-up call for every resident of Illinois — your distracted driving could be someone else’s worst nightmare, and no text or other distraction is worth that,” Pritzker said at a bill-signing event at the Illinois Capitol in Springfield. “So next time you hit the road – to be clear, every time you hit the road — please remember the real risks of not honoring Scott’s Law.”

In February, Illinois State Trooper Brian Frank was the fourth involved in a crash this year due to a violation of Scott’s Law. His wife, Lauren Frank, said at the bill signing event that over the past six months, she and her husband have been on an arduous journey that has included visits to 35 doctors, four hospitals, three brain surgeries, two emergency room visits, 12 ambulance rides and eight weeks of therapy.

Lauren Frank said Brian is in a state of “unresponsive wakefulness” and remains in critical condition.

“The setbacks are devastating, and the unknowns of our future are overwhelming,” she said. “The daily grief sits heavily on us as we wait and watch Brian fight for his life, to come back to us. And again, this was all preventable.”

Frank said while Scott’s Law was named for Lt. Scott Gillen, a firefighter killed while assisting with a crash on the Dan Ryan Expressway in 2000, it honors every officer who has died on roadways and those who currently patrol them.

ISP reported 1,340 violations of the law during the 19-day period between Feb. 18 and March 7, according to the governor’s office.

Illinois State Police Director Brendan Kelly noted “education and enforcement” are the best method of ensuring safety through Scott’s Law, crediting Frank for her efforts to share her story.

“And maybe if they listen just a little bit to what she had to say, they’ll slow down, they’ll move over, they’ll give a damn about what’s going on around them, instead of being self-centered and being clueless about the people that are out there trying to protect public safety,” he said.

Kelly said one of the laws signed by Pritzker, House Bill 3656, makes it easier to prosecute drivers violating the law.

The database will include information on crisis services, wellness, trauma information, nutrition, stress reduction, anxiety, depression, violence prevention, suicide prevention and substance abuse. The goal is for that program to go live by January.

Frank, meanwhile, said more is needed to support officers, including adequate funding to ensure every squad car “is the most capable the market has to offer at withstanding damage.”

“It continues after that with unparalleled medical care for officers injured in the line of duty,” she said, citing costs and barriers to medical care as burdens on officers’ families.

She also said society must work at “getting back to a state and a country that doesn’t just see a uniform or cop, but instead sees Brian, a husband, a son, a brother, a godfather, an uncle and a best friend, someone who has already saved countless lives and who has a lifetime of saving more ahead of him.”