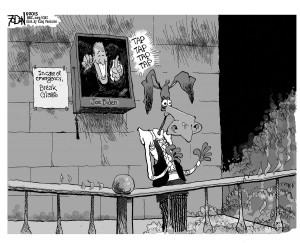 Is it premature to ask who Donald Trump will choose to be his vice-presidential running mate? Maybe. Maybe not. No matter what absurdity The Donald spouts, no matter how bigoted or simple-minded, he maintains his lead in the polls ranking the GOP candidates. There are at least a couple of reasons.

First of all, the rest of the field is made up of ridiculous caricatures of regressive hatefulness or those who are mind-numbingly boring. On the second point, a few of them — Scott Walker and Jeb Bush — have announced to the world that, by gum, they’re going to become feisty. It’s a “No More Mr. Nice Guy” strategy that is somewhat funny and somewhat sad at the same time. It’s also just another straight line for Trump to mock, and he’s wasting few opportunities to do so.

Getting back to the question of who will be his running mate: This is assuming he’ll even want one, since he doesn’t like to share the spotlight. How about we solve his ego problem by naming someone fictional? Perhaps a woman would be good, since (don’t let his misogyny fool you) he loves women. Just ask him. After all, he has married three of them.

It’s too easy to digress here, so I’ll get right to it: His ideal running mate is … wait for it … Ashley Madison. As I said, fictional, but all too real to the millions of people who are suddenly living in abject fear of being exposed by hackers as subscribers of a site devoted to adultery. Then again, anything that is adult about our political process is welcome.

It might be a tad early, but if we are to believe Trump, the campaign is a done deal, as he might put it. Actually, what he did say in Mobile, Alabama, at his partially filled stadium rally is: “I would like to have the election tomorrow. I don’t want to wait.”

But Trump shouldn’t start his White House renovations quite yet. He has a few hurdles ahead, not the least of which is the Democratic Party and its presumptive nominee, Joe Biden. Yes, that’s right, Joe Biden.

Biden, as we all know, is pondering whether he wants to run one more time. We know that because of the rash of stories quoting those close to him, the designated leakers. He is reported to be game-planning how he’d overcome Hillary Clinton’s huge advantages — a gargantuan organization and tons of money. He’d definitely be starting behind.

The truth is, he doesn’t have to declare anything. Hillary is doing everything she can to go down in flames. If she’s finally consumed by the distrust she manages to always generate, that’s when Biden can race to the rescue, saving his party from disaster and inheriting all of the infrastructure and contributors abandoning Hillary’s sinking ship.

Wouldn’t a Biden-Trump race be fun? Each day would bring a new quote that would light up social-media and cable-news outrage. We’d be regaled with a daily competition of Dueling Doltishness. Imagine the debates, imagine the intrigue surrounding the vice president choices. It’s mind-boggling. Or is it mindless? What it will be is government by hucksterism.