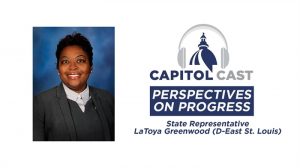 SPRINGFIELD — The St. Louis metropolitan area is no stranger to racial tension. In 2014, the Missouri-side suburb of Ferguson was rocked by protests and riots when an African American teenager named Michael Brown was shot and killed by police.

Brown’s death has been cited as one of several high-profile police killings that propelled the Black Lives Matter movement to national attention.

Now, in the wake of the May 25 killing of George Floyd by a white Minneapolis police officer, the Black Lives Matter movement is gaining broad-based public support that crosses racial lines. It is inspiring protests and demonstrations throughout the U.S., including many cities in Illinois.

State Rep. LaToya Greenwood represents a district just across the river from where Michael Brown was killed. And while she says the East St. Louis area has been calmer, the people there are still expressing sadness and frustration at the racial inequities that continue to plague the nation.

Greenwood spoke by phone during an interview for Capitol News Illinois’ special podcast series, “Perspectives on Progress,” a collection of conversations with state leaders about their perceptions of race relations and their ideas about how to move forward.

Greenwood represents the 114th District that includes a portion of East St. Louis, a city of 26,000 people that is 96 percent black and where more than a third of the residents live below the poverty line, according to the most recent census estimates. Her district also includes Centreville, a town of just under 5,000 people where 45 percent live below poverty.

Greenwood said she believes the key to lifting up those communities is by reinvesting in basic things such as infrastructure, schools and jobs.

“You know, we’re still going through COVID-19,” she said. “I represent East St. Louis and Centreville, Illinois with, you know, Centreville has been reported as one of the poorest communities in our nation, not just our state, and East St. Louis with high poverty, high unemployment. And so there are calls for just some, some change, some investment in communities that have received nothing.”

Greenwood said she sees a glimmer of hope for her district in the budget that lawmakers approved during the special session in May, which earmarks hundreds of millions of dollars in federal stimulus funds for communities that have been hardest hit by the COVID-19 pandemic.

Numerous studies have shown that African Americans have been disproportionately affected by the pandemic, representing a far higher percentage of hospitalizations and deaths from the disease than their makeup of the overall population, according to the U.S. Centers for Disease Control and Prevention.

Many people attribute that to racial disparities in access to health care that causes African Americans to suffer at higher rates from things like heart disease and diabetes — conditions that make people more vulnerable to COVID-19.

“We know that when you bring some type of investments – and that means dollars and money – into communities that have been suffering… that it makes a difference in the impact,” she said. “I kind of designate the community that I represent… we have a ‘below-the-hill and above-the-hill,’ part of the 114th District. And so, in this area, we all want to see each other lifted up, economically and socially, and receive equity and opportunities for all of us.”

Episodes of Capitol News Illinois’ Perspectives on Progress series can be found at capitolnewsillinois.com.