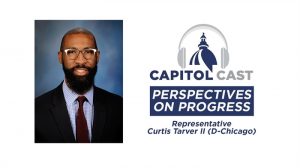 SPRINGFIELD — Daily demonstrations held across Illinois and the U.S. calling for an end to systemic racism are bittersweet, according to state Rep. Curtis Tarver.

Public outcry after the death of George Floyd, an unarmed black man who was killed by a white Minneapolis police officer on May 25, shows “there are more people out there who believe in good,” he said. But at the same time, it is “frustrating” because protests demanding racial equity have happened before and will happen again.

“And that part is very difficult to deal with,” the representative, a Democrat from Chicago, said. “In my private life as a lawyer, I advocate on behalf of people who really don’t necessarily have the ability to do so for themselves. In my public life as a state representative, I try to do the same thing. And it just becomes frustrating when you see videos like this and you realize that despite your best efforts, we have so far to go.”

Tarver, who spoke with Capitol News Illinois for a podcast series called “Perspectives on Progress,” said he did not watch the entire video depicting the officer kneeling on Floyd’s neck for nine minutes.

Still, he said it highlights one improvement society must make “at a very basic level” — “we all need to care about others the same way we care about our family members.”

The representative said he “absolutely” has experienced instances of racism.

“For me, the issue is that if things like that happen to me, and I’m an attorney and I’m a state rep and I have some financial means to hire a private attorney, that’s one thing,” he said. “But how about so many people who don’t have those opportunities…And that’s what I see in my community. Those are the calls that we receive far more often than I care to admit.”

Improvements must be implemented in conjunction with each other, Tarver said. While police reform is high on his list — “we need to be in a position where officers are held to a higher standard,” he said — so are mental health improvements, housing integration and classroom diversity.

The representative added additional legislative initiatives have value, but there are already “plenty of laws on the books.” Their practicality depends on enforcement by state’s attorneys, district attorneys and attorneys general.

Journalists and news outlets have a role to play in societal changes, Tarver said. National conversations must focus more on the message protestors are shouting and less on property damage and looting.

Before Illinoisans can successfully change current practices, difficult topics should be discussed, the representative said.

“There’s a lot of conversations that are not had because people are afraid of being labeled something, when the reality is most of us are just ignorant in some capacity,” Tarver said. “And so the more that we break down these barriers and we have conversations and we’re candid and honest with each other about our experiences, I think the better off we’ll all be.”

Capitol News Illinois’ Perspectives on Progress series is a collection of conversations with black legislative leaders in Illinois about their views on the current state of unrest in the U.S. and how they believe the state can move forward. Episodes can be found at capitolnewsillinois.com.