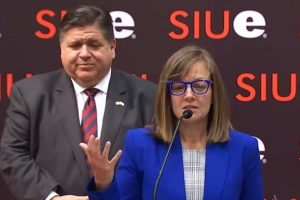 SPRINGFIELD – Three new state laws will aim to break down barriers to feminine hygiene products such as tampons and sanitary napkins for those who can’t afford them.

Two of the laws make menstrual products available at state colleges and universities and require homeless shelters to stock the products, budget permitting. Another would require the state to apply for a waiver to allow certain federal assistance funds to be used on the products, provided the federal government makes such a waiver available.

Gov. J.B. Pritzker signed the measures at Southern Illinois University Edwardsville Thursday, Aug. 5, contrasting the state’s efforts to pass women’s health legislation to Republican-led states such as Missouri seeking to overturn the Supreme Court precedent of Roe vs. Wade as it pertains to abortion rights.

“Given the high price of menstrual products such as pads and tampons, it’s no wonder that many women below the poverty line have had to sacrifice their personal health and hygiene in order to afford food or other basic necessities, turning to socks and toilet paper to manage their menstrual cycle,” Pritzker said. “It’s a tragic situation that significantly increases their risk of infection and limits their ability to live their fullest lives.”

House Bill 641 requires state universities and community colleges to stock feminine hygiene products in any restroom in a college building that serves students. That measure passed the House 74-37 and the Senate 42-13, each with mostly Democratic but some Republican support. It takes effect immediately.

“We all agree, collectively, that soap, toilet paper, napkins, tissues, seat covers and all those other things are provided for us in public spaces,” bill sponsor Rep. Katie Stuart, D-Edwardsville, said at a news conference. “In fact, we probably don’t really ever think about it until we’re in a situation where we really need something like that, and it’s just not there. This legislation puts menstrual hygiene products in that same category, which is exactly where they belong.”

House Bill 155 would require the Illinois Department of Human Services to apply for a waiver to the federal government to allow the use of Supplemental Nutrition Assistance Program and the Special Supplemental Nutrition Program for Women, Infants and Children to purchase diapers and menstrual hygiene products.

But the federal government does not currently offer such a waiver, so the bill has no immediate effect. Rep. Barbara Hernandez, D-Chicago, who sponsored the measure, said advocates are “formally asking the federal government to take this step forward and help countless women afford the products that they need.”

That bill had unanimous support in the General Assembly.

House Bill 310 requires homeless shelters that serve women and youth to make menstrual hygiene products available free of charge. That requirement, however, is “subject to the availability of funds in the homeless shelter’s general budget,” according to the bill.

“I cannot personally imagine the indignity of having to use some other item as a makeshift sanitary product,” bill sponsor Sen. Christopher Belt, D-Swansea, said at the news conference. “But I believe people who have already been deprived of so much should not have to suffer that, too.”

That measure passed the General Assembly with only one vote against in the Senate and three votes against in the House. It will become law in January 2022.