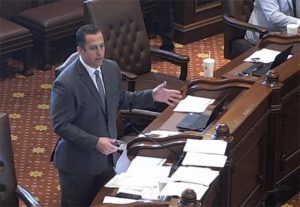 State Sen. Michael Hastings, D-Frankfort, speaks on the Senate floor in September 2021 in this file photo. Gov. J.B. Pritzker on Sept. 22 urged Hastings to resign from the Senate amid accusations of domestic violence by Hastings against his estranged wife. (Blueroomstream.com)

Sen. Emil Jones III, D-Chicago, was charged in federal court earlier this week with soliciting a $5,000 bribe from a red light camera company. And Sen. Michael Hastings, D-Frankfort, faces accusations of domestic violence against his estranged wife, according a report by public radio station WBEZ in Chicago.

“Senator Jones is accused of accepting bribes. And Senator Hastings is accused of abusing women. They should answer the charges and have their day in court,” Pritzker said in a statement Thursday. “But in the best interests of their constituents, these men must resign from their offices. Resigning only their leadership roles falls short of what the public should expect. I want to send a clear message to the people of Illinois: Corruption and abuse have no place here.”

So far, however, Senate President Don Harmon, D-Oak Park, has not gone that far.

“The gravity of the accusations required immediate action and consequences, which is why the Senate president demanded and received resignations from their leadership posts,” his spokesman, John Patterson, said in an email statement. “Now it is up to these individuals and their constituents to determine their futures.”

The governor’s statement came just a little more than six weeks before the Nov. 8 general election in which both senators are on the ballot.

Jones is running unopposed in the 14th District, which includes portions of Chicago and its southwest suburbs. He is the son of former Senate President Emil Jones Jr.

Hastings faces a challenge from Republican police officer Patrick Sheehan in the 19th District in the city’s south suburbs. Once considered a rising star in the Democratic Party, he is an attorney and Army veteran and was awarded the Bronze Star for his service in Iraq.

Hastings’ legal troubles began more than two years ago when he was sued for racial and gender discrimination by his former chief of staff. The state hired a private attorney to defend him and eventually agreed to pay $100,000 to settle the case.

But according to WBEZ, he now faces accusations of domestic abuse from his estranged wife, including an allegation that “in 2020, he put her in a headlock and slammed her into a door repeatedly.”

“The allegations made therein are baseless and without merit,” Hastings said in a statement Thursday through his spokesman. “I look forward to continuing to serve the best interests of the hard-working men and women of the south suburbs.”

His Republican rival, however, joined Pritzker in calling for Hastings’ resignation.

“I have done my best to run a positive campaign on my record of supporting and defending our families and community,” Sheehan said in a statement. “However, the abuse allegations against my opponent have become too serious to ignore.”

Jones did not respond to a request for comment.