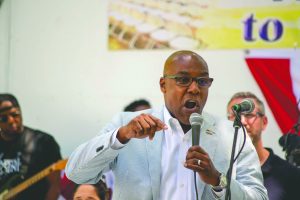 Attorney General Kwame Raoul speaks during the Governor’s Day Picnic on the Director’s Lawn at the Illinois State Fair on Aug. 14 in Springfield. (Capitol News Illinois photo by Jerry Nowicki)

SPRINGFIELD — Illinois Attorney General Kwame Raoul this past week said he would reject a settlement agreement with opioid manufacturer Purdue Pharma under its reported current terms and announced a lawsuit against several other opioid manufacturers.

In April, Raoul’s office filed a lawsuit against Purdue Pharma, the manufacturer of the opioid OxyContin and defendant in thousands of other lawsuits from local municipalities and states affected by the opioid epidemic.

Raoul’s suit alleged the company “dispatched sales representatives to Illinois hundreds of thousands of times” between 2008 and 2017, and “funded third-party publications under the guise of educational materials to promote opioids and downplay their risks.”

Raoul alleged these tactics more than tripled prescriptions of Purdue’s opioids in Illinois. In a news release, he pointed to Illinois Department of Public Health statistics that showed more than 2,000 Illinoisans were killed by opioid overdoses in 2017. IDPH also reported instances of babies born with neonatal abstinence syndrome, which can be caused by opioid exposure, increased by 64 percent from 2011-17.

In August, Raoul expanded the suit against Purdue to include members of the Sackler family, which founded and operates Purdue Pharma.

“The Sackler family knowingly misled the public and continued pushing Purdue’s addictive opioids without care or consideration of the death and destruction their product caused,” Raoul said in a statement Wednesday.

Raoul’s statement was in response to media reports that detailed a tentative settlement between Purdue and thousands of municipal governments and more than 20 states.

The New York Times reported the deal, for which final details are still being negotiated, would compel Purdue to file for Chapter 11 bankruptcy and dissolve. A new company would be formed that could continue selling OxyContin and other medicines, but its profits would be used to pay the plaintiffs in the suit, which was reported to be worth $12 billion.

Purdue would also be required to donate drugs for addiction and overdose treatment, and the Sackler family would donate $3 billion in cash over seven years but would not be forced to admit any wrongdoing.

Raoul, however, was among at least 20 attorneys general who told NBC News they had not agreed to the deal.

“My office is prepared to hold the Sacklers accountable, regardless of whether or not Purdue declares bankruptcy, and I am pleased that a majority of states will continue to fight,” he said in a statement.

According to the news release, Raoul’s expanded suit asks the court to “prohibit Purdue and the Sacklers’ deceptive conduct” to ensure “it does not happen again in the future,” and to assess penalties against the defendants. Raoul is also asking the court to require the defendants to pay to help remediate the opioid problem and forfeit profits resulting from the alleged misconduct.

“I reject in the strongest terms, any agreement that does not adequately hold the Sackler family accountable for the irreparable harm their actions caused to families in Illinois and across the country,” Raoul said in the statement. “My office expanded our lawsuit against Purdue Pharma to include the Sacklers because as the family behind Purdue, their ruthless pursuit of profits destroyed other families and communities throughout Illinois and the nation.”

Raoul filed a similar lawsuit Tuesday against 16 other opioid manufacturers, alleging they “carried out unfair and deceptive marketing campaigns that prioritized profits over public health.”

The companies’ actions, Raoul’s office said in a news release, “resulted in unprecedented levels of opioid prescribing, while the distributors irresponsibly flooded Illinois with opioids, failing in their role as gatekeepers in preventing the diversion of opioids.”

Raoul’s lawsuit seeks similar results as the one against Purdue: to “abate and remedy the statewide public nuisance,” prohibit the manufacturers’ and distributors’ “deceptive and unfair conduct” and force penalties on the companies.

SPRINGFIELD — The advertising and other business practices of tech giant Google will be under heavy scrutiny in the coming months as part of a bipartisan investigation led by 50 attorneys general, including Democrat Kwame Raoul of Illinois.

Raoul’s office announced the joint investigation in a news release this week, noting it will “determine whether the tech giant operates in violation of state and federal antitrust laws” and will be conducted in conjunction with federal authorities.

The investigation will focus on Google’s advertising practices, and whether its dominance in the advertising and search market constitutes “anticompetitive behavior that harms consumers,” according to a news release from Raoul’s office.

“I am committed to protecting consumers’ right to internet access that is free from anticompetitive behavior,” Raoul said in a statement. “This investigation aims to safeguard consumer choice, foster innovation, ensure online privacy, and maintain the free flow of online information.”

The probe will be led by Republican Attorney General Ken Paxton, of Texas, and the coalition includes bipartisan attorneys general from 48 states, Washington D.C. and Puerto Rico.

In a press release posted to Paxton’s public website, he said Google has become synonymous with the internet for most Americans and might have been acting to undermine consumer choice.

“There is nothing wrong with a business becoming the biggest game in town if it does so through free market competition, but we have seen evidence that Google’s business practices may have undermined consumer choice, stifled innovation, violated users’ privacy, and put Google in control of the flow and dissemination of online information,” he said in a statement. “We intend to closely follow the facts we discover in this case and proceed as necessary.”