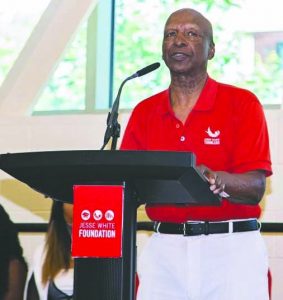 SPRINGFIELD — Illinois’ secretary of state is pursuing legislation to codify the office’s long-held policy of not giving federal agencies full access to its database of driver’s license photographs as a means to identify someone’s legal status, a spokesperson said Monday.

That initiative is one Jesse White has employed since 2013, when the state created an avenue for “undocumented” immigrants to obtain a temporary visitor’s driver’s license, Dave Druker, spokesperson for the office, said.

Officials from U.S. Immigration and Customs Enforcement and the Federal Bureau of Investigation reportedly used facial recognition technology to comb through the driver’s license identification databases of several states last week, including Utah, Vermont and Washington.

White said in a statement on July 8 that Illinois did not share information with the law enforcement departments, in keeping with the stance he wants to see codified.

“The fact is, we do recognize down the road, when there will be another secretary of state, they might interpret it differently or take another position,” he said in an interview on Illinois Public Media’s The 21st. “We are going to work to get a law passed to that effect – if not in the veto session, definitely by the spring session of the General Assembly.”

Veto session is the last week of October and the second week of November.

White’s office does share information if the subject of a federal agency’s investigation is a potential terrorist or stands accused of a violent crime, Druker said. Legal status, though, is not “an acceptable consideration.”

To comply with a subpoena, the secretary of state’s office conducts a search through its database for the specific person a law enforcement entity is investigating. The office does not grant complete access to its collection of driver’s license photographs, Druker said.

White’s position on this resulted from promises made to “the immigrant community” when the General Assembly was working on the temporary visitor’s driver’s license bill in late 2012 and early 2013, Druker said.

The program was an initiative of Senate President John Cullerton, a Democrat from Chicago, who said at the time it was a highway safety measure — meant to encourage “undocumented immigrants” who may have already been driving a vehicle to apply for a temporary visitor’s license.

It requires those who lived in Illinois for at least one year, are not qualified for a Social Security number and do not have documentation from the U.S. Citizenship and Immigration Services to pass a vision test and a driving test and have proof of car insurance to qualify for a three-year license.

The license is specially marked and cannot be used to board an airplane, purchase a firearm or vote.

Druker said the secretary of state’s office had to assure people information submitted in their application for the license would not be used to identify their citizenship status. It was, and remains, an important initiative, he added, because it ensures those driving in Illinois were properly tested and are insured.