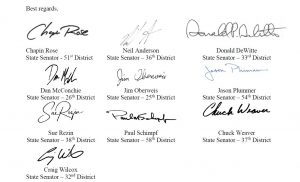 The Department of Employment Security was widely reported to struggle with the historic influx of unemployment filings it received from residents who lost their job due to the COVID-19-induced economic downturn.

While the unemployment rate dropped from the pandemic peak of 16.8 percent in April to 11.3 percent in July, the senators argued Illinoisans continue to have problems applying for and receiving benefits from the department. These issues are “long-standing” and “continue unabated,” they wrote in a letter Aug.20.

Reopening the Employment Security offices for “face-to-face assistance,” as Secretary of State Jesse White allowed for motor services buildings, is the best solution, the senators added.

“Surely in 6 months, couldn’t we have installed plexiglass barriers and outside air ventilation systems in the IDES offices by now,” they asked in their letter. “Limit the number of people in the offices, socially distance, mask, all that, hell, we don’t care, put a tent up outside and buy laptops for the staff — but get these offices back open. People are hurting.”

Sen. Chapin Rose, from Mahomet, said in a phone conversation Aug. 21 that an avenue must exist for state employees to maintain their safety while still opening Employment Security Department doors for Illinoisans to receive assistance. He said if White could design a way for that to happen, schools can resume in-person lessons, and food and banking establishments are open, there is a way for residents to apply for unemployment benefits in person.

This request for department officials and Pritzker to rectify systemic delays and inaccuracies in unemployment benefits is not new. Most recently, House Republicans asked for the same outcome after residents experienced fraud in a program designed to provide economic relief for those members of the economy who do not normally qualify for such benefits.

When faced with complaints about the Employment Security Department’s trouble in the last six months, Pritzker has maintained that officials are doing everything possible to solve the problem.

“As the Governor has repeatedly said, hiring skilled workers at IDES is a top priority since the state agency was hollowed out after many years,” Pritzker’s spokesperson said in an email. “Training a full-time worker to assist in the unemployment process takes nine months and requires lawmakers vote in favor of a budget that provide [sic] resources instead of sitting idle while critical government agencies are hollowed out.”

His administration partnered with a private firm to create a system for Illinoisans to apply for unemployment benefits under the federal Pandemic Unemployment Assistance program. Officials also hired more than 500 new workers, increasing personnel who can assist callers in locating necessary forms online.

A spokesperson for the governor said IDES processed weekly claims “more than 10 times higher than the number of claims the agency processed weekly during the recession of 2008.” To achieve this, the department allowed employees to work more than 40 hours per week and designed a call-back system, she added.

The Republican Senators wrote they supported the governor’s actions from March through June to manage the spread of COVID-19, but the IDES system is “broken and ridiculous.”

“It is now past the middle of August. We are moving into our 6th month with a system that is apparently incapable of being fixed — and phone calls from new hires, who have been poorly trained and are unable to respond to basic questions, aren’t helping,” they wrote.

They added they were “unsurprised” when Chicago television network WGN reported that “less than one half of one percent” of calls from residents to the Department of Employment Security were answered. The outlet analyzed more than 78 million phone calls placed over four months.

The department is “returning about 12,000 calls per week and working through the system to return calls as quickly as possible,” Pritzker’s spokesperson contested.

“To put it simply, this is not acceptable,” the senators wrote in their letter to Pritzker. “Our constituents feel like they are caught in some real-life Franz Kafka novel. But this is no joke — this is real and painful, and it is seriously damaging the people that we both serve.”

In a statement, Pritzker’s spokesperson said, “this administration looks forward to continuing the important work of ensuring state government provides the critical services Illinoisans rely on and is ready and willing to work on real solutions when the Senate GOP presents them.”