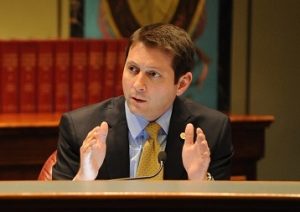 SPRINGFIELD — The state Senate on Tuesday, June 15 approved a change to next year’s budget at the request of Gov. J.B. Pritzker to correct drafting errors in the measure that passed in the early hours of Wednesday, June 1, with little time for it to be read by lawmakers.

Hours before the Senate action, Pritzker issued an amendatory veto of next year’s $42.3 billion budget to ensure that state funding takes effect when the 2022 fiscal year begins on July 1.

Pritzker’s amendatory veto to the budget made July 1 the date that portions of next year’s operating budget would take effect, since some of those sections of the budget were not assigned an effective date.

“Without this amendatory veto, many of the appropriations in the bill would not take effect until June 1, 2022, eleven months into Fiscal Year 2022,” Pritzker said in his veto message.

Sen. Jason Barickman, R-Bloomington, criticized Democrats in the Senate for failing to notice the errors in the budget that was introduced June 1 without enough time for lawmakers to read the more than 3,000-page document before voting on it.

“This side of the aisle has said on countless occasions that the manner in which complex and controversial legislation is passed need not be done in the way it’s being done these days,” Barickman said June 15 on the Senate floor.

“We have a legislative process that is designed to give transparency and allow people to have input in that process but instead of embracing this, what we see (from the majority party) is a continuous desire to operate through an expeditious process, in the dark of the night, without any transparency that results in things like this: chaos,” he added.

In an emailed statement, House Deputy Minority Leader Tom Demmer, R-Dixon, also called out the Democrats for passing consequential legislation in a manner that lacks transparency.

“Gov. Pritzker’s amendatory veto once again highlights the need for an honest and transparent process in budgeting. Dropping a massively flawed budget in the last minutes of session is unfair to democracy and the residents of Illinois,” Demmer said in the statement.

Following the vote in the early hours on June 1, Senate President Harmon, D-Oak Park, filed a motion to reconsider the budget that would have paused sending the bill to the governor. But Harmon removed his motion to reconsider days later after Barickman attempted to force a vote on the motion.

“Perhaps we would have been able to deal with it then,” Harmon said of his motion to reconsider during Senate floor debate.

The amendment to the budget bill was approved by the Senate, 36-21, which is exactly the number of votes it needed to pass.

Votes taken in either chamber after May 31 must receive a three-fifths majority, under the constitution, or at least 36 votes in the Senate and 71 votes in the House, in order for an earlier effective date to be implemented.

The measure now heads to the House for final approval.