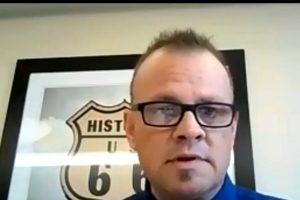 Prisoner Review Board appointee Jeff Mears was recommended by the Senate Executive Appointments Committee Tuesday, March 22 but failed to get the the required votes for confirmation in the full Senate. (Blueroomstream.com)

SPRINGFIELD – The Senate Executive Appointments Committee moved six appointees to the Illinois Prisoner Review Board through committee on Tuesday, March 22 but the only appointee of Gov. J.B. Pritzker that came for a vote before the full Senate was rejected.

The 15-member Prisoner Review Board decides on the release and conditions of release for offenders from the Illinois Department of Corrections. The governor appoints the board, the Executive Appointments Committee votes on whether to recommend those appointments, and the full Senate determines whether the members will be approved.

On March 22, PRB member Jeff Mears was recommended by the Senate Executive Appointments Committee, but by later that afternoon he failed to reach the 30-vote threshold for approval by the full Senate.

In addition to 18 Republicans who voted no, 18 Democrats did not vote. Sen. Patrick Joyce, D-Essex, joined the GOP and voted no.

Mears is a former Illinois Department of Corrections employee from southern Illinois. He has voted on more than 40 cases for the PRB while awaiting Senate action.

“Republicans have set out on a mission to dismantle a constitutional function of government, just like the previous governor,” she said in a statement. “We remain committed to ensuring that highly qualified nominees fill these roles, especially because we must fulfill our constitutional obligations for justice and cannot jeopardize key public safety functions of the board like revoking parole for those who violate the terms of their release.”

The statement was referring to the approximately 4,500 parole revocation hearings held by the PRB each year at locations around the state about 15 to 20 times per month. Three board members must be present at each hearing to render a decision on whether to terminate an offender’s parole, otherwise the offender would be released and deemed not in violation of parole.

Pritzker had sent a letter to Executive Appointments Chair Sen. Laura Murphy, D-Des Plaines, and Sen. Jason Plummer, R-Edwardsville, on March 15 urging them to act on appointments to address the potential of not having enough board members for the revocation hearings.

The Senate did not take up those appointees but has until the end of session on Monday, March 28 to vote on them before they are automatically approved due to a provision in the Illinois Constitution that sets a 60-session-day timer for action.

Two other PRB appointees, Oreal James and Eleanor Kaye Wilson, were passed along for Senate consideration without recommendation from the committee. These appointments, too, must go before the Senate by end of session Monday for a vote or they will be automatically approved.

The PRB appointment process has come under scrutiny by Republican members of the Senate in the past year. James and Wilson were appointed on April 2, 2019, but Pritzker pulled their appointments on March 19, 2021. They were reappointed two days later.

The governor can withdraw nominations and reappoint the same appointee to restart the 60-session-day clock in which their appointments could be heard by the Senate. This practice is allowed under Senate rules and has been used by previous governors.

Plummer, the Edwardsville Republican, has long raised concerns about the number of PRB members who were voting on offender releases without being confirmed by the Senate.

“There are a checks and balances,” he said. “The governor appoints and we advise and consent. The way the governor wants it to be handled is he appoints and that’s the end of it.”

“And so instead of doing the right thing by appointing more mainstream people that we would agree with, he just hides them from the Senate,” he said.

Pritzker, meanwhile, has blamed the Senate for failing to act.

The strategy of pulling and reappointing was used on Mears, who Abudayyeh, Pritzker’s spokesperson, said has 20 years of experience at the Shawnee Correctional Center.

“While his official role is a union painter, facility wardens and administrative staff have asked Mears to be a hostage negotiations coordinator and member of the elite negotiations team and statewide audit review team,” she said. “His experience in de-escalation and crisis intervention speaks to his skills in collaboration, communication and thoughtful approach to complex issues.”

During the hearing, Plummer stated that the PRB jobs have an annual salary of roughly $90,000 and that by failing to go before the committee and the Senate, the members had less job security and less autonomy.

“I vote with integrity regardless of my personal circumstances,” Bohland replied.

Some PRB members faced scrutiny for votes they had taken while on the board.

James, who holds a law degree from DePaul University, came under questioning for his vote last year to parole Paula Sims, who was convicted in 1990 of murdering her newborn daughter, Heather. She also admitted to causing the death of her infant daughter, Loralei, in 1986. Sims was sentenced to life in prison. Her attorneys had argued that Sims suffered from post-partum psychosis.

James said that he considered the needs assessment conducted by the Illinois Department of Corrections, the parole plan, the original crime and sentence, previous criminal history of the offender and the institutional adjustment of the offender when considering an offender for parole.

Sen. Terri Bryant, R-Murphysboro, pointed to the Sims case one of the more hot-button decisions.

“Their votes speak more about their values than their qualifications on paper,” Bryant said of the PRB appointees.

Wilson is a longtime educator who was director of DePaul University’s School for New Learning, as well as director of urban programs at Chicago City Wide College. She is also godmother to the children of former President Barack Obama.

Last week, Pritzker withdrew his appointment of PRB member Max Cerda. Cerda was convicted of a double murder when he was 16 years old. He was released from prison when he was 35 and began working with offenders transitioning into life outside of prison.