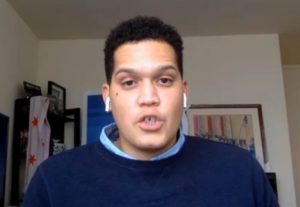 State Sen. Robert Peters, D-Chicago, speaks at a virtual Senate committee hearing on criminal justice reform in October. Peters and fellow lawmakers held several hours of hearings in the run-up to passing a sweeping criminal justice reform package in January that included the elimination of cash bail in Illinois by 2023. (Blueroomstream.com)

Editor’s note: This story is part of an ongoing “Lame Duck Look Back” series in which Capitol News Illinois is following up on the major bills that passed both chambers of the General Assembly in the Jan. 8-13 lame duck session. This is one of several stories examining the criminal justice reform package backed by the Illinois Legislative Black Caucus

SPRINGFIELD – Illinois will transition away from the use of cash bail as a determinant of pretrial detention by 2023 after lawmakers passed a wide-ranging bill reforming several aspects of the criminal justice system in the state.

The legislation, which now awaits Gov. J.B. Pritzker’s signature before it can be finalized into law, would shift Illinois’ pretrial detention and release system to one that is non-monetary.

Starting on Jan. 1, 2023, “all persons charged with an offense shall be eligible for pretrial release before conviction,” and the “requirement of posting monetary bail” will be abolished.

Exceptions from pretrial release under the new law include forcible felonies such as first-degree murder, sexual assault, arson and any other felony involving the use or threat of physical force; stalking and aggravated stalking where the defendant poses a threat to the victim if released; abuse or battery of a family member where their release poses a danger to that family member; gun crimes where the defendant poses a threat to a specific, identifiable person; and cases where the defendant has committed a felony that wouldn’t otherwise result in detention but they are considered a high risk of fleeing prosecution and missing their court date.

The law would place the burden on the state to prove an individual should be detained, rather than the individual proving that they should go free.

According to Chicago Community Bond Fund Director Sharlyn Grace, the state’s attorney prosecuting the defendant must request detention in each eligible case through a verified petition. If the defendant’s offense is a Class 4 felony or misdemeanor, a hearing on their detention must be held within 24 hours of their first appearance before a judge. For a greater offense, there would be a 48-hour window.

Victims of the alleged crime must be given notice for the hearing as well.

Pretrial release may come with some conditions. While the legislation provides guidelines as to what should be considered when establishing conditions — such as the nature of the crime, the evidence available and the history of the defendant — it does not establish what those conditions will be.

In that report, the Commission on Pretrial Practices determined conditions for release should be the “least restrictive” means possible to ensure community safety and the defendant’s appearance in court. The report concludes these measures can include various forms of supervision, rehabilitative services or instructions tied to the nature of the alleged crime that the defendant must follow in order to avoid detention.

The legislation also creates a data oversight board for pretrial practices to track outcomes and methods across all Illinois counties to help make the right determinations on what guidelines will enhance public safety without harming the livelihood of the accused.

The push to end cash bail

Activists, lawmakers and officials who advocate for criminal justice reform have long pointed to the practice of cash bail as a system due for an overhaul.

Entering his second year in office, Pritzker placed ending cash bail at the top of his 2020 agenda and has recently indicated he supports and will sign the criminal justice omnibus.

State Sen. Robert Peters — who crafted the pretrial release provisions alongside a fellow Chicago Democrat, Rep. Justin Slaughter — was previously an organizer with the Coalition to End Money Bond and ran his senate campaign on ending cash bail. The pair had unsuccessfully introduced cash bail reform multiple times before the legislation was absorbed into and passed as part of the criminal justice omnibus in the lame duck session.

Slaughter and Peters on Monday appeared on The Appeal Live, a digital news program, to discuss the next steps legislators and activists can take on cash bail over the next two years before its abolition.

Stakeholders and legislators plan to host town halls to educate the public on the new non-monetary system and dispel myths while working privately to address the concerns of the legislation’s opposition.

The State’s Attorneys Association, with the exception of Cook and Lake counties, opposed the abolition of cash bail, along with law enforcement coalitions.

“What we’ll be doing is engaging them and continue to engage them in discussion,” Slaughter said.

While proponents of the non-monetary system say safety concerns are adequately addressed in the bill, one issue held by some law enforcement agencies that is not tackled in the bill is the loss of revenue generated by monetary bail, which some counties use to fund victim services and court administration.

Peters and Slaughter dismissed the idea, saying it was not a valid reason to maintain the system of cash bail.

“I don’t think judges look over a spreadsheet and see the county is in the red when making bail determinations,” Peters said.

While the elimination of cash bail may result in revenue losses for certain counties, Peters said, those revenue streams are variable rather than fixed and are therefore not a dependable method of funding.

According to Peters, it also underscored the lack of safety under the current money bond system. He used Kyle Rittenhouse, an Illinois teen charged with killing two men at a protest in Wisconsin last year, as an example. Rittenhouse was seen earlier this month at a bar drinking beer and allegedly flashing white power symbols after posting $2 million bail and being released from jail.

Slaughter said there is a need to move away from administrative decisions and systems based on concepts other than restorative justice that harm communities more than they protect them.

“We need to make sure that we wean ourselves off of the prison industrial complex approach. Tying these things to budgetary matters is something we want to do away with,” he said.

Budget shortfalls and gaps in funding for law enforcement agencies forced to follow new and existing mandates – such as mandatory body cameras, reporting requirements, data tracking and administrative procedures – could be issues for the new General Assembly to address in follow-up legislation.

“We do want to look at financial and fiscal impacts that this system will have. We want to reimagine our budgetary priorities,” Slaughter said.