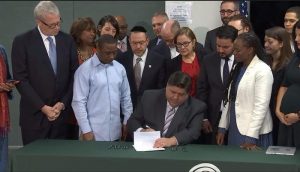 Gov. J.B. Pritzker signs a bill into law Jan. 17 that eliminates driver’s license suspensions for unpaid parking tickets and a host of other reasons during a bill-signing ceremony in Chicago. (Photo courtesy of Illinois.gov)

SPRINGFIELD – Tens of thousands of Illinoisans who have had their driver’s license suspended or revoked for having too many unpaid parking tickets or fines for other non-moving violations will soon get their driving privileges reinstated.

Democratic Gov. J.B. Pritzker on Friday, Jan. 17 signed Senate Bill 1786 into law. Effective July 1, it repeals existing laws that either required or allowed the secretary of state to suspend driving privileges for unpaid fines and other violations.

“With this bipartisan legislation, Illinois now recognizes the fact that suspending licenses for having too many unpaid tickets, fines, and fees doesn’t necessarily make a person pay the bill — but it does mean that people don’t have a way to pay,” Pritzker said in a statement. “We, as a state, have a vested interest in making sure all our residents who need their licenses to apply to a job or an apprenticeship program, or who already use their licenses to drive to work, to the grocery store, or to the doctor, don’t lose those opportunities because of a practice that reinforces cycles of instability.”

Under current law, the state can revoke someone’s license for having 10 or more outstanding parking tickets in one municipality. It can also suspend the license of any person who owes civil penalties or taxes to the Illinois Commerce Commission or owes fines to the Illinois Toll Highway Authority for five or more toll violations.

Current law also provides for automatic suspensions for committing certain offenses unrelated to driving. Those include underage drinking and supplying alcohol to a minor, even if the offenders were not in a vehicle at the time; criminal trespass on a vehicle, even if the person doesn’t take control of the vehicle; and theft of motor fuel.

The secretary of state also has authority to suspend or revoke the driver’s license of any minor who is judged to be truant, delinquent or addicted. The same applies to anyone judged to be “afflicted with or suffering from any mental disorder or disease.”

Those laws are now all repealed or greatly curtailed. And, starting July 1, people whose licenses are suspended or revoked for those reasons will have their licenses reinstated.

That means unpaid parking tickets, toll violations, unpaid fees and civil penalties and convictions for motor fuel theft are no longer grounds for suspending a license, unless the fee is owed to the secretary of state for the issuance of a license or permit.

The new law also provides that liquor law violations can result in license suspensions only if the person was in a vehicle at the time of the offense. And criminal trespass on a vehicle can only result in suspension if the person took actual physical control of the vehicle. It also removes mental illness as a reason for suspending someone’s license.

“For years, Illinois has held driver’s licenses hostage when people couldn’t pay excessive parking and vehicle tickets,” Sen. Omar Aquino, a Chicago Democrat and principal sponsor of the bill in the Senate. “That drives people into poverty and keeps them out of work. Using license suspension for debt collection is cruel, counterproductive, and frankly embarrassing.”