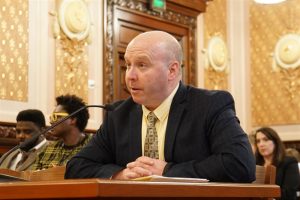 Tom Cullerton, D-Villa Park, is pictured in an Illinois Senate committee. He resigned his seat in the state Senate Feb. 23 amid reports that he would plead guilty to federal charges of embezzlement. (Photo by Lee Milner, Illinois Times)

Cullerton, 52, a former chairman of the Senate Labor Committee, was first elected to the Senate in 2012 and was seated in 2013. In August 2019, he was indicted on multiple charges of embezzlement for allegedly receiving pay and benefits from Teamsters Joint Council 25 while doing little or no work for the union.

Cullerton had denied any wrongdoing and was originally scheduled to go on trial in 2020, but that was postponed due to the COVID-19 pandemic. His most recent trial date was scheduled for April 18.

On Feb. 23, though, the Chicago Sun-Times reported that Cullerton’s attorney, Daniel Collins, had requested a change of plea hearing and Cullerton submitted his resignation to the Senate.

“Tom Cullerton served his constituents in the 23rd Senate District for nearly a decade. I look forward to welcoming and working with a new senator from the district,” Senate President Don Harmon, D-Oak Park, said in a statement.

Although Madigan himself was not charged and denied any wrongdoing, that controversy, among others, led to him being ousted from the speaker’s position by Democrats in the General Assembly and, in 2021, his resignation from the House.

In October 2021, Cullerton’s attorney filed a motion to dismiss most of the charges. In that motion, he explained that Cullerton had been a member of the International Brotherhood of Teamsters and worked as a truck driver for Hostess Brands until that company filed for bankruptcy in 2012, the same year he was elected to the Senate.

“Cullerton had been elected to the state Senate, but like most members of the state legislature, he needed a second job — one with some flexibility, especially since he would be in Springfield during legislative sessions,” his attorney explained.

In March 2013, John Coli, the former president of Teamsters Joint Council 25 who has also been indicted, hired Cullerton and told him “to complete his political responsibilities and to attend picket lines and other union events,” according to a statement Coli made to a grand jury that was included in Cullerton’s court filing at the time.

Cullerton was charged with 39 counts of embezzlement — one for each paycheck he received – as well as illegally obtaining health care through the union’s health insurance plan.

Judge Gettleman denied the motion to dismiss the charges and ordered the case to proceed.

Cullerton’s seat will be filled by appointment from the Democratic party organization in the 23rd Senate district.