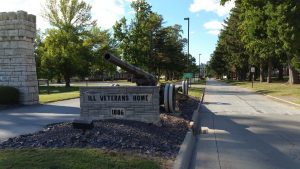 A resident at the state-run Illinois Veterans Home in Quincy has tested positive for both COVID-19 and Legionnaires’ disease, the Illinois Department of Veterans Affairs has reported. The resident lives in Hammond Hall. (quincyivh.org)

A resident at the state-run veterans home in Quincy has tested positive for both COVID-19 and Legionnaires’ disease, according to a news release from the Illinois Department of Veterans Affairs.

The Illinois Veterans Home at Quincy was notified on Dec. 22 of the resident’s positive test for Legionnaires’ disease, which is a severe pneumonia caused by the inhalation of waterborne bacteria.

No other residents have tested positive for Legionnaires’ disease, according to an IDVA spokesperson.

The positive resident lives in Hammond Hall, which had not previously reported the presence of Legionella, the type of bacteria that causes Legionnaires’ disease. Hammond Hall is one of six residential halls at the Quincy facility in Adams County.

After the positive Legionnaire’s test was reported on Dec. 22, Quincy facility staff and officials with the Adams County Health Department spoke by phone with representatives from the Illinois Department of Public Health, the Centers for Disease Control and Prevention, U.S. Department of Veterans Affairs and Dr. Avery Hart, who is a medical consultant for the IDVA homes on behalf of IDPH, according to the news release.

“On the call, the CDC asked for clean-out and flushing logs which are part of the water management plan for the facility. All actions by the Illinois Veterans’ Home in Quincy are consistent with the water management plan following CDC protocols,” according to the IDVA news release. “IDPH infectious disease staff are working with the facility to collect information and further investigate the resident’s illness.”

On Monday, Dec. 28, an IDVA spokesperson said the resident who tested positive for Legionnaires’ disease and COVID-19 is responding well to treatment.

The last legionella test at Hammond Hall was conducted Oct. 27 and was negative, according to the IDVA release.

The single incident of Legionnaires’ disease at the Quincy home comes as the facility also faces an outbreak of COVID-19.

Three legislative committees are investigating the administration’s response to the LaSalle outbreak, and the Illinois Department of Human Services’ acting inspector general has also announced an investigation into the deaths at LaSalle.