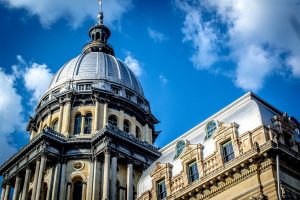 SPRINGFIELD – The fall veto session of the Illinois General Assembly that was scheduled to begin next week has been canceled amid a worsening COVID-19 pandemic, Democratic leaders announced this week, prompting Republicans to question the motives behind that decision.

House Speaker Michael Madigan and Senate President Don Harmon, both Democrats, said in a joint statement Monday that the decision was made out of concern for the safety of lawmakers, staff, their families and the general public, although they left open the possibility that it could be rescheduled if public health conditions improve.

“The front page in (Tuesday’s) Springfield paper warns of a COVID ‘tsunami’ sweeping the region and its health care system,” Harmon, D-Oak Park, said. “This is not the time to physically bring together hundreds of people from all around the state. Given what’s happening, it was an obvious decision. It’s not safe or responsible to have a legislative session under these circumstances.”

“The health and safety of the people who work for and serve in the Illinois General Assembly, and their respective families, is paramount,” Madigan added. “We will continue to monitor the situation, consult medical experts and do intend to schedule additional session days so we can finish our important work.”

Lawmakers typically hold a brief session in the fall to deal with any legislation from the regular session that was vetoed by the governor. This year’s session was scheduled to run Nov. 17-19 and Dec. 1-3.

This year, however, there were no vetoes to deal with, largely because the regular session was severely shortened due to the pandemic, which reached its initial peak in April and early May. The House and Senate held a brief, four-day special session in late May, under strict masking and social distancing requirements, after it appeared the pandemic was subsiding.

Since early October, however, cases throughout the state have been rising sharply to levels exceeding those of the early pandemic phase, particularly in Region 3 of central Illinois, which includes the capital city. As of Nov. 7, the most recent data available, the rolling seven-day average test positivity rate in Region 3 stood at 15.2 percent and had risen in eight of the previous 10 days.

The decision to call off the veto session came at virtually the same time that Sangamon County and the city of Springfield — which had initially resisted Gov. J.B. Pritzker’s enhanced mitigation orders — announced they would begin enforcing those orders on Friday, including closing bars and restaurants to indoor service.

Even though there were no pressing veto issues to deal with, the Illinois Legislative Black Caucus had hoped to use the veto session to advance its agenda of racial justice and equity reforms across a wide range of issues — an agenda that both Harmon and Madigan said they would support.

But Sen. Kimberly Lightford, D-Maywood, the Senate Majority Leader and chair of the ILBC, said those issues would have to wait until it is safe for the General Assembly to convene.

“We are still in the midst of a pandemic, and COVID-19 cases are surging across the state, making the risk too high for the General Assembly to gather at this time,” Lightford said in a statement. “While we will not be able to pass legislation as soon as we hoped, the urgency to bring an end to systemic racism remains. The moment to put forth this critical agenda is now, and I know President Harmon and Speaker Madigan share our concerns and our commitment to making a difference.”

The other significant issue pending before the General Assembly is the ongoing investigation into Madigan’s role in a bribery scheme involving utility giant Commonwealth Edison. In response to a petition by House Republicans, a Special Investigating Committee was formed to determine whether there was sufficient evidence to commence disciplinary proceedings.

But that committee has only met twice, most recently on Sept. 29. After that meeting, the chair of the committee, Rep. Emanuel “Chris” Welch, D-Hillside, announced the committee would not meet again until after the Nov. 3 general election. He has since delayed proceedings indefinitely, saying the committee is waiting for ComEd officials to produce documents the panel has requested.

House rules still require that its committees meet and conduct business in person, and Republicans had hoped that the veto session would provide an opportunity for the Special Investigating Committee to resume its work. But the cancellation of the veto session prompted some GOP lawmakers to question the Democratic leaders’ motives.

“We were able to meet safely in May in an environment that included testing, mask mandates, regular use of hand sanitizer, and more than ample room to practice social distancing,” Rep. Amy Grant, R-Wheaton, said in a statement. “No one from the House, Senate or staff contracted COVID-19 during our session in May, so we know staff is capable of putting adequate safety precautions in place. Congress is meeting and there’s no reason why we shouldn’t be.”

“I can’t help but wonder if the cancellation has more to do with political unrest within the House Democratic caucus than it has to do with health and safety,” Rep. Steve Reick, R-Woodstock, said in a separate statement. “I certainly hope that’s not the case, because it would be a great injustice if Speaker Madigan has placed his political problems ahead of our ability to do the people’s work during a scheduled veto session.”

The 101st General Assembly officially comes to an end on Jan. 12, the day before the next session begins and newly-elected and reelected lawmakers are sworn into office. If the committee does not conclude its work before then, Republicans will have to petition again to form a new committee in the next General Assembly.

Pritzker, who had hoped to use the veto session to get legislative approval for significant budget cuts in the wake of the failure of his proposed graduated income tax amendment on Election Day, also expressed disappointment over the cancellation.

“There is so much work that needs to be done for the state, not just about the budget, but so many other matters, criminal justice reform being one example,” he said at an event in Chicago on Nov. 10. “I’m the impatient sort. I want to get things done sooner rather than later. I’ve been assured by the leaders that we’ll get right at it as soon as we can in January.”