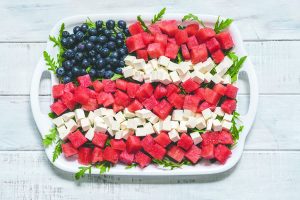 One of the most recognized symbols of the Fourth of July celebration is the American flag.

The American flag began with 13 stars, and today, 50 stars are displayed to represent the number of states now in the union. This number has followed the growth of our country since its infancy.

The 13 alternating red and white stripes represent the 13 original colonies that joined together to declare their independence from Britain in order to establish themselves as a sovereign nation.

Originally, the colors red, white and blue had neither specific meaning nor representation when the flag was adopted in 1777. However, the colors in the Great Seal of the United States did have specific meanings. Charles Thompson, secretary of the Continental Congress, reporting to Congress on the Seal, stated:

“The colors of the pales [the vertical stripes] are those used in the flag of the United States of America; White signifies purity and innocence; Red, hardiness and valor; and Blue, the color of the Chief [the broad band above the stripes] signifies vigilance, perseverance and justice.”

July 4th, also known as Independence Day, has a fascinating history as well.

“No taxation without representation!” That was the battle cry of the 13 colonies in America that were forced to pay taxes to England’s King George III with no representation in Parliament. As dissatisfaction grew, British troops were sent in to quell any signs of rebellion, and repeated attempts by the colonists to resolve the crisis without war proved fruitless.

On June 11, 1776, the colonies’ Second Continental Congress meeting in Philadelphia formed a committee to draft a document that would formally sever ties with Great Britain. The committee included Thomas Jefferson, Benjamin Franklin, John Adams, Roger Sherman and Robert R. Livingston. Jefferson, who was considered the strongest and most eloquent writer, crafted the document. (Nevertheless, a total of 86 changes were made to his draft.) The Continental Congress officially adopted the final version on July 4.

On July 8, 1776, the first public readings of the Declaration were held in Philadelphia’s Independence Square to the ringing of bells and band music. One year later, on July 4, 1777, Philadelphia marked Independence Day by adjourning Congress and celebrating with bonfires, bell-ringing and fireworks.

The custom eventually spread to other cities and towns, both large and small, where the day was marked with processions, oratory, picnics, contests, games, military displays and fireworks. Observations throughout the nation became even more common at the end of the War of 1812 with Great Britain.

Congress established Independence Day as a holiday in 1870, and in 1938, Congress reaffirmed it as a holiday, but with full pay for federal employees.

Even in this time of COVID-19 and social distancing, communities across the nation will find a way to mark this major summer holiday with parades, firework displays and the playing of the “The Star-Spangled Banner” and marches by John Philip Sousa while waving the American flag.

This delicious Flag Day in America Watermelon Feta Salad will be an edible reminder of the flag we all hold dear, and a beautiful centerpiece for your Independence Day celebration!