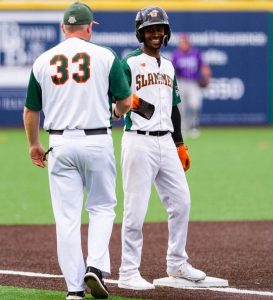 While the Frontier League suspended its season due to the pandemic, the Joliet Slammers are salvaging a season for its fans by organizing a local City of Champions tournament. (Photo courtesy of Joliet Slammers)

While Major League Baseball navigates the logistics of safely pulling off even a shortened season amidst the safety and travel restrictions of COVID-19 and internal economic battles, independent leagues are getting creative in bringing baseball back to fans.

This week, our Road Trips series takes you to back-to-basics baseball played in smaller stadiums at more family friendly prices.

Scattered throughout Illinois — from suburban Chicago to central and southern Illinois — are teams affiliated with various professional leagues and they are giving fans missing a day or evening at the ballpark something to still cheer about.

And for purists, there is the Vintage Base Ball Association teams who take you back to the game’s early days.

The Normal CornBelters, members of the Prospect League, are not playing this season, but the Corn Crib, their home stadium, is hosting the Kernal League, featuring the best college baseball talent in the state.

Doubleheaders are held nightly beginning at 5:30 p.m. Games will be played through Aug. 9.

For more information, go to https://cornbeltersbaseball.com/kernels-collegiate-league. 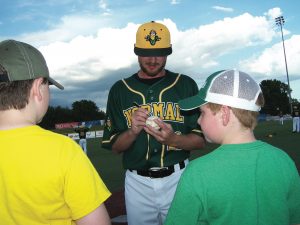 The Normal CornBelters won’t be out signing any autographs this summer as the team is not playing due to COIVID-19. However, The Corn Crib, where the team plays its home games, will be hosting a summer league of top Illinois college players. (Photo courtesy of CornBelters)

The Slammers played their first game in May 2011 and are members of the Frontier League. During their nine years, they have won two league championships — 2011 and 2018.

While the Frontier League canceled its season, the Slammers will be playing in what is called the City of Champions season, featuring the Slammers and three other teams.

The Slammers are managed by former Slammer Billy Petrick.

The teams were drafted after an open tryout was held July 6 at DuPage Medical Group Field. The teams are made up of players drafted from the ranks of Frontier League players unable to play for their current teams, free agents from MiLB affiliated teams, and tryout participants.

The Slammers’ first game will be July 16 and season will go through Sept. 6. The field is directly accessible from the Rock Island Line Metra station platform at Union Station in Joliet. 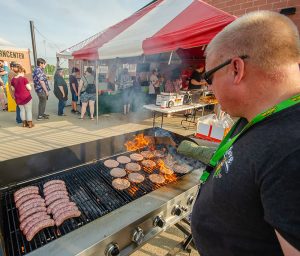 One of the attractions of independent league baseball is affordable food deals and ticket prices. (Photo courtesy of CornBelters)

The Chicago Dogs is a member of the American Association of Independent Professional Baseball and began play in May 2018.

The team’s home games are played in the 6,300-seat stadium at the intersection of Balmoral Avenue and Pearl Street, west of I-294.

The Chicago Dogs’ logo features the colors and stars of the iconic Chicago flag and was inspired by baseball, hot dog and Chicago lovers alike. It represents the team’s brand of family fun and Chicago-style baseball.

The team began its season on July 3 and will have a 30-game home schedule and special promotional offerings.

The Chicago White Sox will be using the Boomers Stadium in Schaumburg as Major League Baseball’s mandated training site for the club’s taxi squad during the 2020 season.

The VBBA was formed in February 1996, when delegates from 13 clubs representing five states assembled in Columbus, Ohio.  Their goal was to commemorate the 150th anniversary of the first recorded base ball match between organized teams. 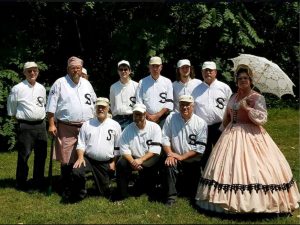 “The mission and purpose of the Vintage Base Ball Association shall be to preserve, perpetuate, and promote the game of base ball as it was played during its formative years in the nineteenth century,” the association states on its website https://www.vbba.org/. https://www.facebook.com/vintagebaseballassociation

The organization boasts 200 teams from across the county, including eight teams across Illinois. They travel across the state and into Wisconsin and Indiana for games held at community parks. 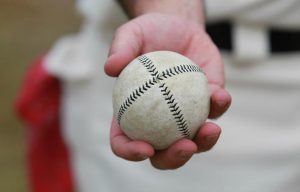 A ball used in vintage base ball games has a crisscross stitching. (Photo courtesy of Belleville Stags