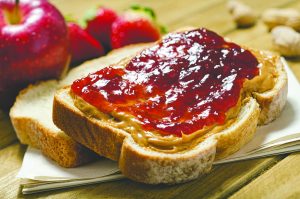 Peanut butter and jelly sandwiches are an enduring lunchtime favorite. Although Dr. George Washington Carver invented more than 300 uses for the peanut, the invention of peanut butter isn’t on the list of his accomplishments. The first U.S. patents for peanut butter were issued to Marcellus Gilmore Edson of Montreal, Quebec, in 1884 and J.H. Kellogg of Battle Creek, Michigan, in 1897.

Edson created his version of peanut butter by milling roasted peanuts between heated surfaces until the peanuts reached “a fluid or semi-fluid state and a consistency like that of butter, lard or ointment.” Health and cereal guru Kellogg called the pasty substance he created “nut butter.”

Making a peanut butter sandwich using organic products is an easy way to create a healthy lunch. Peanut butter is packed with protein and contains vitamins B-3 and E, magnesium, folate and dietary fiber. It also has high levels of monounsaturated fats and resveratrol, which help to protect against the risk of cardiovascular disease. There have been some concerns about peanut allegeries, especially among schoolchildren, and many schools now have a “peanut table” or forbid trading lunches at school. Check your school’s peanut policy before packing your child’s lunch.

These recipes for Apple Peanut Butter on Cinnamon Raisin Bread and Grilled PB&J Sandwiches are great for breakfast, lunch or as an after-school snack. Changing the type of bread you use for your peanut butter sandwiches adds variety and more nutrients. Some children prefer white bread, and now white whole-grain wheat bread is available.

White whole-wheat bread is made with the whole grain and an albino or white variety of wheat. The albino wheat is lighter in color and has a sweet, mild flavor.

You can make the Apple Peanut Butter sandwiches the night before and store them, wrapped, in the refrigerator. Grilled Peanut Butter Sandwiches also make a deliciously easy to make breakfast or snack.

When sliced apples are exposed to air they start to turn brown from oxidation. Dip the apples in a mixture of water and a fresh lemon juice to keep them beautifully crisp.

In a small bowl, mix together the peanut butter and honey. Spread about 2 tablespoons of the mixture onto one side of each slice of 4 pieces of the bread. Place an equal amount of the sliced or shredded apple on top of the peanut butter. Place the remaining slice of bread on top of the apple to make a sandwich. Serve immediately or wrap in plastic wrap and refrigerate overnight. Makes 4 sandwiches.

2. If using a skillet, melt the remaining teaspoon of butter on high heat. Place the unbuttered slice of the bread down in the skillet. Cook for 4 minutes, and then turn and cook the bread on the buttered side until golden brown and heated through.

3. If using a toaster oven, butter one slice of bread and spread the peanut butter and jelly on the other. Toast the slices and then place one slice on top of the other to make a sandwich. Makes 2 sandwiches.

—THE KITCHEN DIVA: New ways to serve an old favorite–