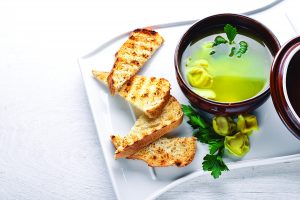 The beauty of soup is that it can be created from whatever you have on hand. (Depositphotos)

My favorite comfort meal, no matter what the season, is a vegetable-packed bowl of homemade soup. Soup is a simple, unapologetic dish that is a culinary classic with primitive roots.

Anthropologists who study old pottery and other ancient remnants of our society have discovered that soup may be even older than originally believed. Scientists at Harvard University have found 20,000-year-old pottery that shows evidence of being exposed to fire. No one knows for sure what was heated, but there are many reasons to believe it was the first recipe for a broth cooked up by our human ancestors.

Fast-forward several thousand years, and there is more information available about the one-pot meal called “sop,” which referred to a piece of bread eaten in broth. By the 17th century, the word “soup” was being used to describe a pottage, or broth. What we know today is that soup, in all its flavors, has humble beginnings. But plain or fancy, complicated or straightforward, it’s an ingenious way to have a complete meal in one bowl.

Soup, in its many international versions, is an edible ambassador of its origin. From rich, spicy Mexican soups to light Asian broths, soup is as distinct as the people and the language of the countries from which it comes. If most Americans were asked to say the first word that comes to mind when they hear the word “soup,” it would be “chicken” or “beef.” This reflects our distinct history and what was available to our ancestors.

The early origins of soup consisted of the boiled carcass of an animal. As the early settlers began to have success agriculturally, vegetables were added to the pot. The slaves of the American south, who had little in the way of meat, harkened back to their African roots and were inventive in making soups and stews with vegetables of all kinds. Gumbo, a word from West African dialects meaning okra, originated this way. The soup consisted of a variety of meats, thickened with okra or file, a powder made from ground sassafras leaves.

My favorite soup recipes showcase seasonal vegetables in a richly flavored broth. Although some soups are cold, most are hot, and whether it’s served in fall, winter, spring or summer, soup is a wonderful way to create a simple, satisfying meal.

The beauty of soup is that it can be created from whatever you have on hand.

It’s a great way to use leftovers or make the most of a full cup of rice or macaroni, a few carrots or potatoes, or a mixture of greens. It’s also an incomparable way to get the most out of meat trimmings or to just be luxurious and cook a chicken for no other reason than to make the best chicken soup ever.

My recipe for Primavera Vegetable and Tortellini Soup is truly a meal in a bowl. You can showcase the best and freshest spring produce in this delicious soup.

Freeze option: Freeze cooled soup in freezer containers. To use, partially thaw in refrigerator overnight. Heat through in a saucepan, or in the microwave, stirring occasionally.