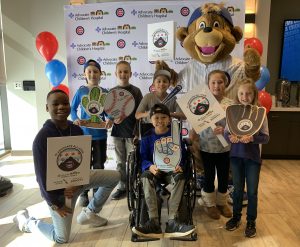 Kyrell Nodora, 11, of McHenry (front ) is joined by other Chicago area pediatric patients Feb. 18 in Wrigleyville who will be going to see the Cubs at their spring training camp in Arizona Feb. 21. All of the children have received treatment from Advocate Children’s Hospital in Park Ridge. (Photos by Karie Angell Luc/for Chronicle Media)

What a way to spend a snowy school holiday.

Kyrell Nodora, 11, of Lakemoor, a fifth-grader at Chauncey H. Duker School in McHenry, received an invitation of a lifetime on Feb. 18, an offer to report to Chicago Cubs spring training in February in Mesa, Ariz.

Kyrell, along with six other pediatric patients who have received treatment from Advocate Children’s Hospital in Park Ridge, was surprised in Wrigleyville by the Chicago Cubs on Presidents’ Day

The children and their family will experience an all-expenses-paid trip, which will include personal time with Cubs players and coaches, plus behind-the-scenes opportunities and tickets to the Cubs first spring training game at Sloan Park on Saturday, Feb. 23. 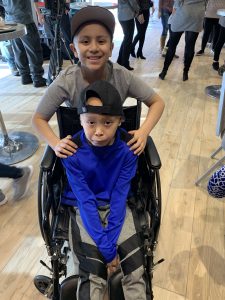 Kyrell Nodora (front) will attend spring training with his friend Angel Martinez (back), 9, of Lake in the Hills. The two children met while Kyrell was receiving chemotherapy. (Photos by Karie Angell Luc/for Chronicle Media)

Kyrell will travel with his parents Lovely and Jose Chia, and his siblings Paul “Mickey” Chia, 11,  and Kalix Nodora, 6.

Chicago Cubs players, who are in Mesa, made the announcement via played back recorded video. Also making an appearance at the reveal was Clark the Cubs mascot.
The Advocate Children’s Hospital patients, all lifelong Cubs fans who range in age from 9 to 13, are diagnosed with conditions ranging from cancer, congenital heart defects and sickle cell disease.The group departed for Mesa midday on  Feb. 21.

Kyrell, who is undergoing treatment for acute lymphoblastic leukemia, was diagnosed in May 2018. His treatment is expected to last up to an estimated three years.

Kyrell wears his Cubs hospital gown often, but the spring training trip to Mesa will be his first official Cubs experience. He has never been to a Cubs game or met any Cubs players.

Kyrell will attend spring training with his friend Angel Martinez, 9, of Lake in the Hills, whom he met while receiving chemotherapy.

Angel, a third-grader at Indian Prairie Elementary School in Lake in the Hills, was diagnosed with stage 4 Rhabdomyosarcoma, a bone and tissue cancer. 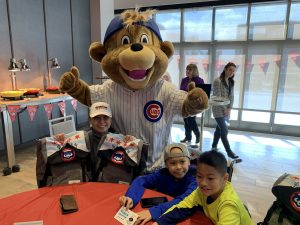 Clark the Cub visits with 11-year-old Kyrell Nodora (center) and his family during an event held at Wrigleyville Monday, Feb. 19 for Advocate Children’s Hospital patients and their families. Advocate, the Chicago Cubs and American Airlines are getting Kyrell and some other patients to spring training. (Photo by Karie Angell Luc/for Chronicle Media)

When Angel was diagnosed, doctors found three masses on his lung, spine and foot. Angel recently  finished one year of treatment at Advocate Children’s Hospital and is in remission.