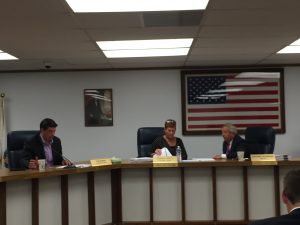 Tavern-financed lawyers hoping to knock a proposed ban on video gambling in Forest Park off the November ballot may take an argument about what constitutes a “legal voter” to the Circuit Court of Cook County and possibly to the Illinois Supreme Court.

At an Aug. 31 hearing of the Forest Park Electoral Board, in an effort to keep off the ballot a citizen-led binding referendum, election lawyers from Evergreen Park-based Odelson and Sterk challenged the definition of who counted as registered voters. The goal was to raise the threshold number of signatures necessary by adding to the total 919 extra voters categorized by the Cook County Clerk’s office as “inactive.”

The Illinois Video Gaming Act, which went into effect in 2009, gives residents a difficult-but-not impossible path to ban state-supported video gambling in their towns: Citizens must collect signatures from 25 percent of “legal voters” to place a binding referendum on the ballot. Typically, ballot initiatives require around 8 percent or fewer of the number of ballots cast in the previous election.

Forest Park citizens already voted against video gambling in 2013, but the referendum was not binding.

This summer, 52 citizens from the informal group, Say Yes to a Vote, collected 2,939 signatures of Forest Park voters — based on a total number of 8,736 registered voters given to them by the office of Cook County Clerk David Orr. That left a cushion of around 745 signatures more than they thought they needed.

A relative of two local bar owners challenged more than 1,300 signatures last week. That led to a two-day records examination where Cook County Clerk personnel threw out about half but overruled challenges on the rest. That leaves around 2,100 signatures.

But according to Burt Odelson, that number is too low. Odelson added up 10,168 legal voters in town as of August 11, including 919 inactive voters.

Using an example from the states of Maryland and Virginia, attorney Odelson said inactive voters would be treated like “second-class citizens” if they were not counted as voters. In 2014, after a computer cross-check, election boards in Fairfax, Va. and the state of Maryland found almost 45,000 voters who appeared to be double-registered in both states. Fairfax decided to keep those “inactive” voters on the rolls until 2019, according to published reports.

Who is an inactive voter?

“An inactive voter is someone whose voter mailings have been returned by the Post Office indicating they have moved,” said Nick Shields from Orr’s office in an email. In Cook County, inactive voters must prove at the polls that they are still residents to vote.

Attorney Adam Lasker of Ancel Glink countered with a challenge to Odelson’s numbers as well. Illinois election law gives a specific date for voting on statewide races. Statute (10 ILCS 5/3-1.3) said, the day before voter registration is closed. According to the law, that means, “on the date registration closed before the regular election next preceding the last day on which such petition may be filed in accordance with the general election law.”

Lasker’s petition signatures were certified by Cook County Clerk David Orr as the totals on March 17, the day after the election. Odelson submitted higher totals available on on Aug. 11. Illinois state election statute says registered voters can be counted “on the date registration closed before the regular election next preceding the last day on which such petition may be filed in accordance with the general election law,” the statute reads. Odelson agreed to submit a new list of voters from March. But Lasker complained that Odelson’s numbers weren’t “certified” by the clerk’s office and therefore were “not trusty evidence.”

A challenge to the proper way to count registered voters is a new twist on Illinois election law, and could be brought, on appeal, to a higher court.

Citizens worry the local bar owners can tap into the deep pockets of video terminal operators to pay legal fees all the way to the circuit court and higher. There’s money to be made placing up to five terminals each in Forest Park with more than 40 liquor-licensed businesses in a two-square-mile town. Terminal operators and bar owners get the largest bite of gambling loss profits with 35 percent each. The state receives 25 percent and the municipality receives 5 percent.

At the hearing, the members of the three-person Forest Park Election board said they were confused about how voters would be counted and what the clerk’s rules were. Mayor Anthony Calderone and the board voted to subpoena members of the clerk’s office to appear before the board Sept. 8 and explain exactly which voters were eligible to vote, and how many signatures were required to let the voters of Forest Park decide the town’s fate on video gambling.

— Ballot fight over video gambling may be battled in higher courts —