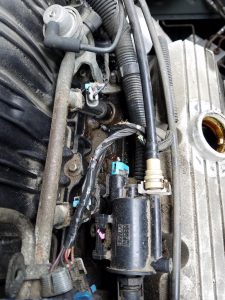 Rats chewed through wiring and made a nest in the engine of a 2003 Buick parked in the Edgewater neighborhood. (Photo by Jessalyn Daniszewski)

Jessalyn Daniszewski had no idea why her 2003 Buick LaSabre was acting up until she brought it to a mechanic near her home in Chicago’s Edgewater neighborhood.

The technician flipped open the hood and recognized telltale signs: Chewed spark plug wires, and bits of food, including a half-eaten baguette. Rats had made a nest in the Buick’s engine.

“We see it a lot,” said mechanic Jose Bautista at Auto Tech in the 5100 block of North Broadway Street. “Customers bring their cars in, we open the hood, and we find rats dead or alive or a lot of poop.”

Daniszewski said she drove her car almost every day, but she parked every night next to three dumpsters in an alley.

“I pay $150 dollars a month for a parking spot because without it you could drive around for hours trying to find a place,” she said in an email. She thinks leaving the car with a warm engine at night next to the garbage may have created a welcoming environment for the rodents.

“I see about 10-15 rats running through the alley on a daily basis, usually at night,” she said. “On the Fourth of July with all the loud fireworks I had to have seen, like, 40 running all around — including right in front of me on the sidewalk,” she said.

“[Rats are] a real problem because it affects the people and the quality of life,” Emanuel said during a March 27 interview on WLS. 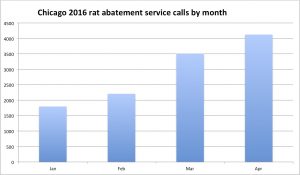 Norway rats are the common Chicago rodent. They live about two years, breed quickly and can carry diseases such as listeria, typhus, worms, salmonella and taxoplasma.

Dog feces, sewer work and not keeping on track of populations can lead to a rat explosion, Emanuel said. This year City Hall increased the rat abatement crew by 10 employees to help catch up to a backlog of complaints.

“If you don’t address it, within six weeks you have a rat problem,” Emanuel said.

No one knows how many rats live in Chicago, but population trends can be tracked by how many Chicagoans call 311 for rat abatement.

According to the city of Chicago data portal, the city has logged about 11,680 requests for rat poison in 2016 so far, but Chicago observed a spike in calls in March and April with 7,500 in two months alone.

In the 48th Ward, where Daniszewski lives, there were 136 requests for rat abatement in the months of March and April. But the ward with the most rat calls was the South Side 34th Ward with 322 calls in March and April alone. The ward includes portions of the West Pullman, Washington Heights, Morgan Park and Roseland neighborhoods.

Emanuel and Ald. Carlos Ramirez-Rosa (35th) introduced an ordinance in March that would fine property owners for not cleaning up dog waste. Fines range from $50-$500.

“Animal feces is a contributing factor [to rat populations]” Emanuel said. “We’ve made some changes for people who don’t clean up after their dog.” 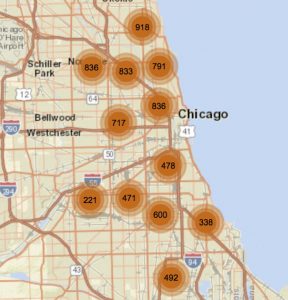 “We go in and do abating before we start the work,” Emanuel said.

As for Daniszewski, she bought a new car and has been researching how to keep rats from moving in.

“I thought about putting poison under the engine, but it doesn’t kill them immediately so they will take the poisoned food back home after they have chewed away on your wires and tubing,” she wrote.

She’s considered “rodent tape” or even “creating a paste of cayenne pepper and water and just painting my wires and tubes with it,” she said.

Her mechanic has no advice.

“Nobody knows how to keep the rats out of the cars,” Bautista said.“ They just go in cars because they need a place to hide or to live or to sleep.”

It’s a boomtown for Chicago’s rats this spring —