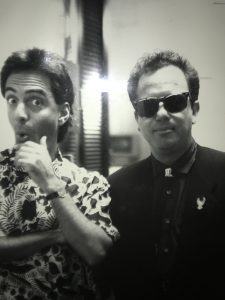 Most people can’t say they’ve waterskied in front of Chicago’s Water Tower Place with their pants down, but then again, most people aren’t Jonathon Brandmeier.

“Lost some bet with a listener,” Brandmeier said commenting on the photo. “I’m not sure (what the bet was), but I would never ask them to do something I wouldn’t do, so I just did it, I guess.”

Brandmeier ruled the local airwaves during a 14-year run at WLUP-FM in the 1980s and ’90s. He is streaming a live podcast most Saturdays (check https://brandmeiershow.com/live/ for updates). The show is available Mondays on podcast platforms.

Asking as many questions of the interviewer as he answers as the interviewee, Brandmeier never seems preoccupied with other things, staying in the moment, more interested in learning about the person on the other end of the phone conversation than promoting himself or his latest endeavor. His conversational tone makes it feel like you are talking to a longtime buddy, not someone who has hung with celebrities and had a Malibu, California mansion. The wit, charm, and talent of the 63-year-old Radio Hall of Famer are readily on display, showing why he dominated local radio and reached national acclaim as well.

During a more than 40-minute, high-energy interview with Chronicle Media, Brandmeier, always the showman, uses the music, interviews, and comedic recordings at his fingertips on his home radio board to turn much of the interview into what could easily be a radio bit. However, on two occasions in the interview, the Fond du Lac, Wisconsin native goes more than seven minutes without using the radio board and just talks about the radio business, his return to the airwaves and the craziness of his life, interspersing, of course, comedic tales of his past and questions of the interviewer.

Here are excerpts from the Chronicle interview:

WLUP listeners stand naked on a billboard platform during the morning rush hour. “I asked what is the craziest thing you would do for Leisure Suits tickets,” Brandmeier said. “We’re all crazy indeed!” (Provided photo)

On his home setup

JB: I have a first-class, state-of-the-art radio station/studio in this basement. First class. We can stream; we have TV quality. I can put a guest in here that you think is right in front of me, but he’s on a mic across the country or across the world. The engineer who put it together is Bill Malone; he’s a South Side boy. He said it is one of the best stations he’s ever been involved in. Stations! This is a radio station, This is a radio stream. We can stream anywhere. We do stream it live on Saturdays and then we put it out as a podcast.

This is what a podcast sounds like to me now, ‘And this is my podcast today and I’m going to be talking about dogs and what you can do with your dog,’ It’s like ‘Yeah, OK. I’ve got it.’ My opinion is my opinion but I like to have more production value, good guests, make it entertaining, make it a show. I only know one speed — showtime. It’s showtime. (Claps his hands twice.) Let’s go. Bingo, and you’re on your way. 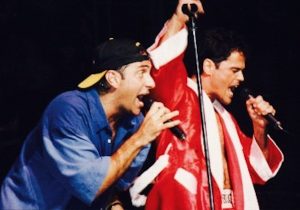 On charging for show

JB: Then it was like ‘I know what you should do. You do a podcast and then go behind a paywall.’ This is where it gets really bad, it’s stupid. We aren’t making any money. Zero. I’m just doing it. I didn’t want to be behind a paywall — and especially now. Now it’s even more apparent to me that we have reached subscription fatigue. There’s a name for it. The New York Times did a story and said we have reached ‘peak subscription’ in this world — $4.99 here, $5.99 there, $6.99 there. The one thing about radio is you didn’t have to pay for it. Somebody did and that ruined radio, by the way, because there were 18,000 commercials. We’re free, unfiltered. We can do whatever the hell we want whenever we want it. That‘s what I think is the great thing about that. Can we sustain it? I haven’t the slightest idea. Maybe there are smart people out there that will say, ‘Brandmeier, I know what you need to do.‘ So we’re just going to do it. I’m doing it because I like doing it and if people like that I’m doing it, well, that makes it all the better. It really does. I just started to do it and saw what happened, tried to figure it out. It’s like being in a game without being in a game. I’m in it … Without money, people have to share it. They have to go and like it. You’ve got to subscribe on Apple podcast or wherever they get their podcasts, or they can join us live on the stream on Saturdays.

On his faithful followers

JB: Everything we ever did, any success we ever had, was because of the audience. Them. They entertain me. Yeah, I’m the ringmaster. I get it. I know how to do it. I’m the ringmaster, but they amuse me and I, in turn, amuse them, I guess. It’s just one big crazy ass family. I had to do it that way. 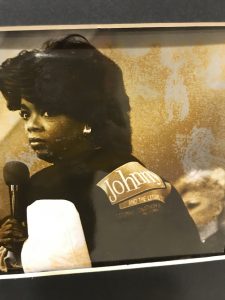 On the show’s future

JB: I’m still trying to figure it out. One guy said, ‘You guys are building the plane while you’re flying it.’

I want the feeling of a live show. Someone said, ‘It’s the podcast that thinks it’s a radio show.’

That’s kind of what it is. We’re on Apple podcast and right out of the box we beat Ron Burgundy and were right behind Amy Schumer. Just like that.  Show No. 1. We’re on Spotify, wherever you get podcasts. We’re everywhere and you can hear it live by going to brandmeiershow.com. We do the show on Saturdays and you can get the podcast Mondays. We put it in your hand, right now. It’s a work in progress. We don’t know how it’s going to take, don’t know what the schedule’s going to stay like. I think now we have a captive audience on Saturdays. They’re all drinking and listening, having fun. I don’t know about you, but the minute I can get out of here, I’m gone, going to the lake. I’m out. That’s it. I’ve got to go fishing. I’m not kidding around. (There was no show scheduled for Saturday, May 30).

On going back on commercial radio

JB: I would suggest to anyone thinking about that, they would have to really back off on their commercials, but who am I to tell people how to run a radio station? I’m just a guy who likes to have some fun on a radio station. 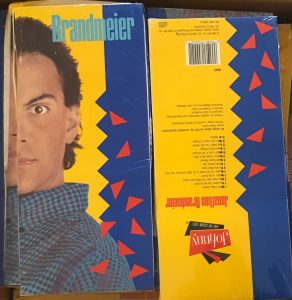 On his current hometown

JB: I’m in the suburbs, the Chicago suburbs. That’s all I’m saying. I don’t need my neighbors knocking on the door.

On his favorite guest