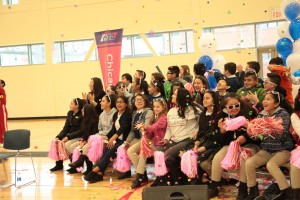 Ask a grade-school student how to get quick math homework help on the Internet and they will often answer, “Khan Academy.” The online not-for-profit free education platform of videos and interactive lessons is often better known to kids than their parents.

Students and their teachers got the chance to meet Sal Khan, founder and CEO of Khan Academy, in person when he came to the Jesse White Field House in Chicago Jan. 28 to kick off the new LearnStorm2016 online math challenge for students in grades 3-12.

“Anyone can build and grow intelligence through practice and perseverance,” Khan told students.

The challenge, which started Jan. 29, teams up with teachers or parents to provide a tailor-made unique math learning program that teaches students at their own pace, and rewards both “hustle” and mastery. Classrooms get “swag” boxes of silly prizes such as the sunglasses and pink pompoms distributed at the kickoff rally. 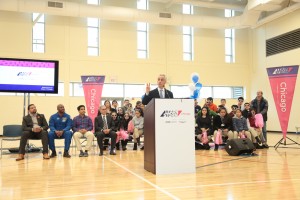 Students and teachers were showered with confetti at the kickoff ceremony for the Khan Academy LearnStorm2016 kickoff event at the Jesse White Field House in Chicago, Jan. 28. (Khan Academy photo)

Students also heard from Leland Melvin, a former NFL player and engineer who served as a Space Shuttle astronaut with NASA. Melvin talked about how he programmed robots in space, thanks to his math skills.

Students in Illinois counties of McHenry, Lake, DuPage, Will and Cook are eligible to participate in the challenge. The program was rolled out in San Francisco last year and expanded this year to include Chicago, Idaho and Ireland.

Seventh-grade math teacher Meagan Stass, of Barrington Middle School Prairie Campus, signed up to be a LearnStorm2016 ambassador because she’s been a big fan of Khan Academy since 2010.

“I’m leading the storm, as we like to call it,” Stass said.

Stass is an advocate of Khan’s idea of the “flipped classroom,” which allows students to learn math concepts from videos at home and then spend class time practicing their skills to learn mastery with the presence of the teacher.

“Thanks to the support of my principal and the other teachers, I’ve pretty much got a completely flipped classroom this year,” Stass said. 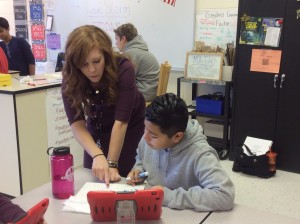 “[In a traditional classroom] students go home and they’re struggling with classwork at home. In a flipped classroom, that’s my job — to be there and help them through the struggle, to sit there with them and see their perseverance trying this and trying that.  Then you see the light go off in their eyes when they get it. I absolutely love it. It’s a very different way to approach education.”

With online exercises, students have work tailored to each skill level, she said.

Khan Academy grew from YouTube videos Kahn used to tutor his middle-school age cousins in math to a worldwide education platform in 35 languages. The program is used by 100,000 people daily worldwide, and around 5 million users per year, Khan said.

“On my door there is a poster that says ‘Fail forward,’” Stass said. “I’m always telling the kids, hey, you can learn anything. You have to make mistakes, that’s the learning.”