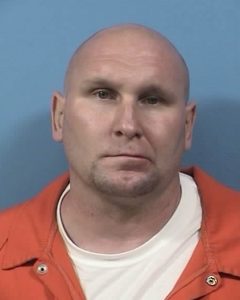 A Chicago man has been sentenced to 17 years in prison for stealing more than $50,000 from a professional gambler.

Robert Chencinski, 49, of 1919 Leavitt St., entered a plea of guilty Sept. 12 to one count of robbery, a Class 2 felony, in front of DuPage County Circuit Court Judge Robert Miller, who handed down the sentence on Sept. 13.

Chencinski was subject to Class X sentencing guidelines, which call for a mandatory minimum sentence of six to 30 years in the Department of Corrections, based on his criminal history.

At 8 a.m. Aug. 10, 2015, a man stopped at a Naperville intersection while driving from his Naperville home to Rivers Casino in Des Plaines. As he proceeded through the intersection, his vehicle was rear-ended by a car driven by Chencinski. After hitting the victim’s vehicle, Chencinski exited his car, approached the victim’s vehicle and reached through the open driver’s side window. He put the victim in a choke hold, opened the driver’s door and pulled the victim out of his vehicle.

Chencinski then overpowered the victim, stole $51,500 from him, returned to his car and fled the scene.

A witnessed called 911 and Naperville police located the offender’s vehicle. After a short car chase, Chencinski abandoned his vehicle in a Naperville neighborhood. About an hour later, Chencinski was located hiding in a resident’s back yard.

“Mr. Chencinski’s decision to ambush, assault and rob an innocent man of more than $50,000 has indeed earned him every minute of the 17-year sentence handed down by Judge Miller,” DuPage County State’s Attorney Robert Berlin said. “This sentence sends the message that this type of brazen behavior will not be tolerated in DuPage County and will carry significant consequences.”

Chencinski will be required to serve 50 percent of his sentence before being eligible for parole.