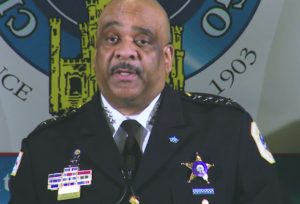 Chicago police Supt. Eddie Johnson talks to members of the City Club of Chicago during an address May 9. Johnson pointed out that although Chicago is viewed as a high-crime city, per capital it is nowhere near the top. (Screen shot from City Club video)

Chicago police Supt. Eddie Johnson said he wants all residents of the city to view his department in a favorable light.

“I want so desperately for the Chicago Police Department to be a department the entire city can be proud of,” Johnson said May 9 in talking to members of the City Club of Chicago. “We’re on our way to that, but we’re not there yet because it’s hard to correct years, decades of mistreatment in some of these communities. But you can’t correct that if you don’t acknowledge that.

“I’ve acknowledged that we’ve treated parts of the city — in the African-American and Hispanic communities — inappropriately.”

The 31-year member of the Chicago Police Department said the department might not get all the way there before he leaves — whenever that may be — “but we’re a lot closer than when I took this seat.”

He said whenever it’s his time to leave he would hope people would remember his passion for the city in which he grew up.

“What I want people to know is that I care deeply about protecting this city and keeping it safe,” Johnson said.

The police superintendent, who grew up in the Cabrini Green public housing complex until 9 years old, said he grows tired of the national image of Chicago as a crime-ridden city.

“The national narrative about Chicago is frustrating for me,” Johnson said. “That narrative about Chicago being a city on fire is just not true. You know we have pockets on the South and West sides, where we have some challenging areas of course and we’re addressing those, but I think we just have to do a better job (selling ourselves) because when you look at Chicago per capita in terms of violent crime, we’re nowhere near the top and people don’t know that. We just get so much attention because we’re so big.”

Johnson said when he took over the helm of the Chicago police force in 2016 violent crime was higher than it had been in decades. However, he said, in each subsequent year the department has been able to drive down those crime numbers.

The superintendent said that he took over during a challenging time for the department, with neighbors of the South and West sides besieged with violence.

“Some of those communities (were) still reeling in the wake of high-profile shootings and frankly, many of those people did not trust the police,” Johnson said.

He said outgoing Mayor Rahm Emanuel has been a great help in giving the superintendent what he needs to make the city safer during the past three years.

“I could not ask for a better partner in fighting crime,” Johnson said. “The man has not failed me one time when I’ve asked for resources in the fight against crime.”

Johnson said that he and Emanuel pledged to put 970 more officers on Chicago streets. The city has more than doubled that putting 2,418 officers in the police ranks since January 2017.

Johnson said during his three years as chief he has done everything in his power to change the perception that people have of the city and the Police Department.

He has instituted community-policing programs, getting officers and residents working together to address crime issues.

“Simply stopping to say hello to someone can make all the difference in the world should they ever need to respond to an emergency call at that same location,” Johnson said.