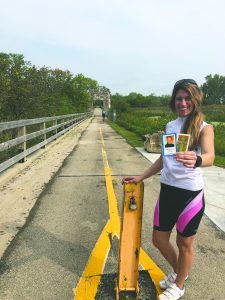 Chicago police officer Kim Conte holds up memorial cards in honor of her brother who died of a heroin overdose two years ago. Conte and fellow Chicago officer Andy Kral biked 300 miles in memory of her brother and to raise money for the Heroin Epidemic Relief Organization. (Photo courtesy of Kim Conte)

Kim Conte thought of her brother often during her fundraising 300-mile bike trek.

Conte’s brother died two years ago from a heroin overdose.

“I remembered how funny he was, how he made me laugh,” Conte said. “Sometimes, I thought how I wished I could give him one more hug.”

This year she wanted to do something more.

“I thought ‘How can I raise awareness with people that would be head-turning?’” Conte said. “I said, “I will do the ride again, but triple it.’”

Conte set the goal of raising $3,200 for HERO, which works to stop the heroin/opioid epidemic with programs and by supporting pieces of legislation, all while providing support to individuals who have lost a loved one to heroin/opioids or have a love one struggling with addiction right now.

The Chicago officer smashed her goal, raising $5,000 for the HERO program.

“It all went to HERO, a nonprofit group that offers free Narcan (a spray used to reverse heroin overdoses) and offers counseling, grief support and sends speakers into schools,” Conte said.

Along with fellow Chicago officer Andy Kral, who also did last year’s ride with her, Conte went from Chicago to the Starved Rock area near Ottawa, along the Illinois & Michigan Canal State Trail out to Rock Island and back. The 300-mile trek ran from Sept. 20- 22

Conte said she was touched by all the people she met along the route, many of whom had been affected by the heroin epidemic personally. She said a man from Dallas bought a T-shirt from her supporting the HERO foundation, noting that a family member of his had had issues with heroin. 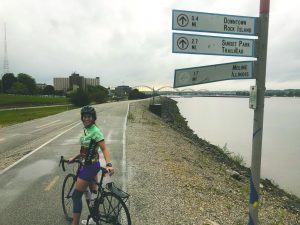 Conte takes a break after reaching the outskirts of downtown Rock Island. The Chicago police officer biked 300 miles in memory of her brother who died of a heroin overdose n 2017. (Photo courtesy of Kim Conte)

HERO was founded by Brian Kirk and John Roberts after each of them had a son die while battling heroin addiction. The two dads set out to call attention to the heroin/opioid epidemic spreading through middle-class communities, to connect with and build a support network for families who have lost children to heroin, and to work so no parent has to experience the loss of a child to addiction.

“He makes fun of me, saying I just got my training wheels off and I’m going 300 miles,” Conte said.

Conte said having Kral along for the ride helped mentally and emotionally.

Conte’s brother, Joey, had been in and out of treatment, before overdosing in 2017 at the age of 32.

“For eight years, he struggled with mental health issues and heroin,” she said.

She talked to a successful retired attorney in his 40s who had a cousin who died from heroin.

“Everyone knows somebody dealing with or who has dealt with heroin, making this real,” Conte said.

She said people forget that police officers have normal lives and deal with the same ill effects of the heroin epidemic as they do. 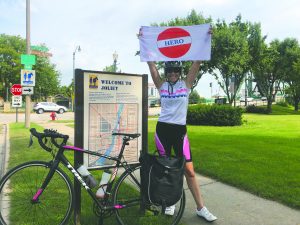 Kim Conte holds up a HERO flag as she reaches Joliet on her trek. (Photo courtesy of Kim Conte)

“I want to make the community aware that we are human and that there are people out there standing up for people affected by addiction,” the Chicago officer said.

Conte works with youth in the city, sharing anti-bullying and addiction prevention messages.

“Even when I was on the street before getting involved with youths, I would often see a lot of heroin users,” she said.

Conte, a member of the HERO board of directors, said she constantly hears how an individual got started on opioids because of an injury and then morphed into using heroin.

“I do work with support groups and a lot of people will tell stories about their son being in a car accident or getting hurt in football and that because he was hurt, he eventually started using heroin,” Conte said. “I hear it all the time.”

She said people often cope with their pain by using opioids and/or heroin. 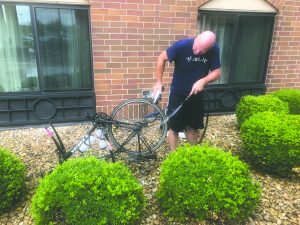 She said a mental health issue, like her brother had, only adds to addiction problems.

“He would relapse quite often,” Conte said. “He went through a lot of treatment and a lot of counselors. His withdrawals were really bad.”

Conte said as the epidemic continues to touch individual families, the stigma of having an addicted family member is starting to lift.

“When my brother passed, I was told by a lot of people, a lot of police officers that they had a family member or friend who was an addict,” Conte said. “It took me being vulnerable for people to say that though. Awareness is out there, but a lot of people are still afraid of what others may think.”