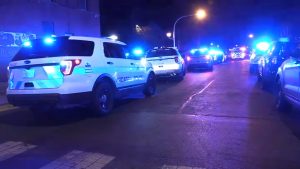 Chicago police are investigating a rash of recent shootings, including four fatalities, and a man and his dog both being shot.

A 37-year-old man died at Stroger Hospital after being brought to the hospital with a gunshot wound to the head around 2:30 p.m. April 14. He was taken to the hospital in a gray SUV. The victim was initially listed in critical condition, but later succumbed to his injuries.

Just before that victim arrived at Stroger, a 34-year-old man was taken to Rush Hospital with a gunshot wound to the right forearm. The man was a passenger in a vehicle heading northbound on the 300 block of South Homan Avenue when offenders in a black SUV heading eastbound on Jackson began firing in their direction. He was listed in good condition.

Area North detectives are investigating if the two incidents are related.

A 16-year-old boy died from injuries sustained in a shooting at 2:05 p.m. April 14.  The teen was shot in the stomach on the 3600 block of South Marshfield Avenue. He was taken to Stroger Hospital, where he later died. A handgun was recovered close to where the incident took place.

Shortly after 7 p.m. April 13, an unknown male was on the 2900 block of East 81st Street when he heard gunshots and felt pain.

The victim was struck once in the chest and was transported to the University of Chicago Hospital, where he was initially listed in critical condition, according to Chicago police. The individual died shortly before 8 p.m. April 13, according to hospital officials.

In another fatal shooting April 13, a 40-year-old man was shot several times on the city’s North Side before being transported to St. Francis Hospital, where he died.

The victim was involved in what appeared to be a narcotics-related verbal altercation at 8:18 p.m. April 13 with another man in a parking lot on the 5600 block of North Lincoln Avenue. The offender fired several shots striking the victim. The offender fled in an older-model sedan southbound on Lincoln.

In the other recent shootings:

No one was in custody as of April 14 for any of the shootings.