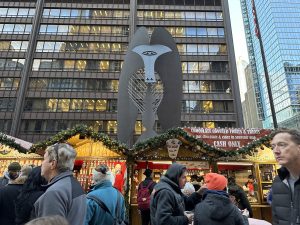 Shoppers took advantage of the nice weather on Nov. 22 to enjoy an afternoon at the Christkindlmarket in Daley Plaza. (Photo by Karie Angell Luc/for Chronicle Media)

Christkindlmarket has returned to the Chicago area providing a memory making experience for many people who have made the market a holiday tradition.

The Daley Center Plaza in downtown Chicago is a flagship Christkindlmarket location that visitors and tourists have come to know since the market began in the 1990s. The Wrigleyville market along Gallagher Way (3635 N. Clark St.) at Wrigley Field is a recent market addition.

“Come down and check it out.” 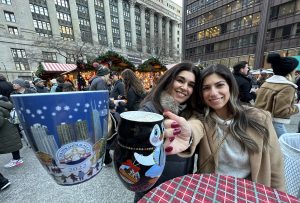 Bleeker said the aromas at Christkindlmarket tantalize the senses.

“Probably some of the things that people notice the most about the Christkindlmarket,” Bleeker said, are, “the smells, specifically of the roasted nuts…very popular throughout the world of course, but really originating from the German markets.

“There are about 40 different types of roasted nuts here at this market alone.

“Everyone has to try something,” Bleeker said with a smile.

For regular/repeat fans or for people who work downtown and visit the market frequently at lunch or right after work, Bleeker said that pop up booths rotate at the Daley Plaza Christkindlmarket, “every few days so there’s always a new vendor.” 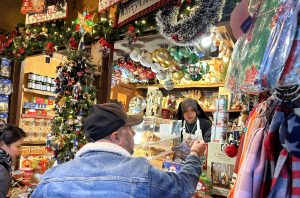 A nun from St. Roger Abbey staffs a booth at the Daley Plaza market as a shopper checks out what is for sale. (Photo by Karie Angell Luc/for Chronicle Media)

Sixty percent of Daley Plaza vendors are from Germany, Bleeker added, with the rest of vendors from countries such as Ukraine and also the United States.

Weekends, which typically have the busiest attendance, have restricted entry, Bleeker said, “just to make sure that the crowd flows smoothly and people can still enjoy themselves and get to see everything they’d like to see in a safe way.”

Scott and Susie Soukup of Lake Villa were just two of the many visitors who took advantage of the mild weather on Nov. 22 . The couple is marking their 50th wedding anniversary this year.

Both enjoy the hot German mulled Glühwein. They took the train from Round Lake to Chicago to visit Daley Plaza. 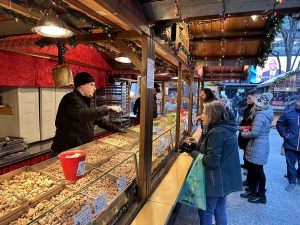 Coming to Christkindlmarket is a tradition for them, and so much so that the Soukup couple brought a previous year market mug design (also for receiving a discount on hot wine refills).

“It makes you feel like Christmas,” Susie Soukup said of the Christkindlmarket experience.

“This is a good place to start the holidays.”