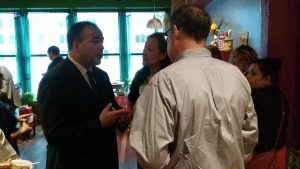 Fritz Kaegi (left), Democratic nominee for Cook County assessor, talks with campaign supporters at an event. Kaegi said the Assessor’s Office he seeks to lead needs to be more transparent and supported an Illinois Appellate Court ruling ordering the office to disclose its valuation methodology for residential, commercial and industrial properties in the county. (Kevin Beese/Chronicle Media file photo)

The Democratic nominee for Cook County assessor is applauding an Appellate Court ruling requiring transparency from the office he wants to run.

On June 29, judges of the Illinois Appellate Court’s First District ruled to compel the Cook County Assessor’s Office to disclose its valuation methodology for residential, commercial and industrial properties.

Fritz Kaegi, Democratic nominee for Cook County assessor, said that the public has a right to know just how property values are determined.

“An Illinois appellate court ruled that the Cook County Assessor’s Office must be transparent in its methodology and practices for valuing residential, commercial and industrial property,” Kaegi said in a statement. “This unanimous decision affirms that the public has a right to know.

“Not only is transparency in government the right and smart things to do, in this case, it is the legal requirement under the Illinois property tax code. With new assessments rolling out in Chicago right now — commercial, industrial and residential — this office has a duty to the people it serves to open up its methodology and tell people how assessments are being calculated.”

The Chicago Tribune had filed a Freedom of Information Act request for spreadsheets and other records the Assessor’s Office uses to determine the value of properties for taxation purposes.

The Assessor’s Office, run by longtime boss of the Cook County Democratic Party Joe Berrios, had argued that assessments are “the result of analysts’ research, data collection, thoughts, impressions and experience.” The give-and-take of the valuation process put the documents in the FOIA’s deliberative process exemption, attorneys for the Assessor’s Office argued.

“Even if analysts make adjustments as the process continues, the data is the data,” Justice John C. Griffin wrote in the unanimous opinion. “There is nothing in the record that discloses the Assessor Office’s internal evaluations.”

Appellate Judges Sheldon A. Harris, Mary L. Mikva and Griffin said that light needs to be put on the property valuation process.

“The public has a strong right to know about how they are being taxed by their government as opposed to the government’s fairly meek interest in secrecy,” Griffin wrote. “The balance in this case weighs in favor of the public, and in favor of disclosure.”

“Property valuation, which results in the direct taxation of the citizenry, is a critical government purpose,” Griffin added. “… Property taxation is a function of the government that the public has a right to scrutinize because, as even the Assessor’s Office concedes, the process must be uniform and fair.”

The Cook County Assessor’s office is responsible for valuing 1.8 million parcels each year for taxation purposes.

No Republican ran in the primary for Cook County assessor; and no candidate has stepped forward as of yet to run against Kaegi in the General Election.