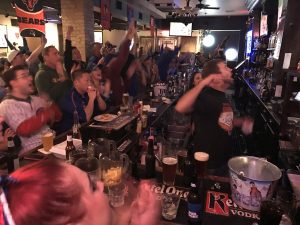 The Cubs offense gave fans a lot to cheer about jumping out to an early lead against the Cleveland Indians.

You’d be hard pressed to find a pub around Chicago that didn’t serve up Chicago Cubs spirit with each drink poured Nov. 2 on Game 7 of the World Series.

“We’re ready for a win, Northbrook is excited, Chicago is excited and Chicago fans will back the Cubs in the years to come,” said Constantine Kyriazopoulos of Itasca, co-owner of The Landmark Inn Bar and Grille in Northbrook, 1352 Shermer Road. 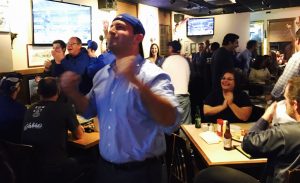 Greg Tsonis of Chicago jumps for joy in blue

“The Cubs have been fun to watch,” said Helene Kapetaneas of West Chicago, also bar co-owner.

“They play with a lot of heart.”

At this historic saloon building at more than a century old, fans arrived early to save a table or bar stool to bear witness to one of the biggest games in Chicago sports history. 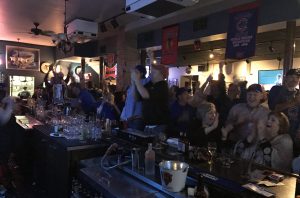 From left right, Julie Weldon of Northbrook and Connie Fuller of Northbrook part of the crowd gathered at the Landmark Inn Bar and Grille to cheer on the Chicago Cubs in game 7 of the World Series.

“I got here about ‪5 p.m. and saved two seats for my girlfriend and friend,” said Kevin Carney of Northbrook, who called himself a Cubs fan, “my whole life.”

“I’ve got a lot of friends who know him,” said Dave Vainberg of Palatine, a 2004 GBN graduate.

“When I was in school, I knew him to be a good athlete.”

So, Cubs or Kipnis?

“He’s a great ball player and yes, he’s making some awesome moves,” said Vainberg, about Kipnis. “But I’m wanting him to be bad!” 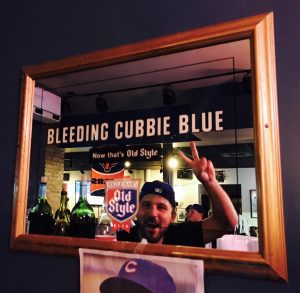 A bartender at the Landmark Grill in Northbrook cheers on the Chicago Cubs in game 7 of the World Series on Nov. 2.

Some fans raised outside of Northbrook felt the same way.

“I get how they (Northbrook) want to support their hometown,” said Greg Tsonis of Chicago, “but this is Cubs territory!”

Kipnis played baseball and football for the GBN Spartans.

“He was an unbelievable athlete,” recalled Bob Anderson of Northbrook who brought his children to watch Kipnis play as a wide receiver and kick returner for the green and gold Spartans football program at GBN’s Lutz Stadium in Northbrook.

“Everything was Kipnis,” Anderson said.

“I wish him absolutely the best but I still want the Cubs to win.”

While Chicago Cubs supporters had endured 108 years without a championship win until 2016, in Northbrook, fans of GBN Spartans varsity football have waited since the mid 1970s for a gridiron championship. 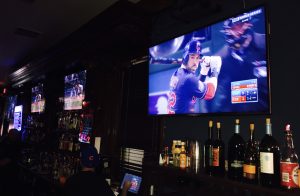 Cub fans at the Landmakr Grill in Northbrook watch native son Jason Kipnis at bat for the Cleveland Indians during game 7 of the World Series on Nov. 2.

In 1974, the GBN Spartans bested the East St. Louis Flyers 19-13 in overtime at Hancock Stadium at downstate Illinois State University, becoming the first 5A state champions in Illinois.

Fast forward to 2016 and the GBN Spartans football team, coached by Bob Pieper, head varsity coach, is headed to another playoffs round ‪on Sat. Nov. 5 against the Warriors of Willowbrook High School in Villa Park.

Coincidentally, all four of the 2016 season jersey numbers of each of the four senior varsity GBN football captains add up to the Chicago Cubs legacy number of 108.

“Wow, that’s pretty amazing,” said a shocked Anna Pappas of Northbrook who had dinner at The Landmark Inn with her husband Bill Pappas. 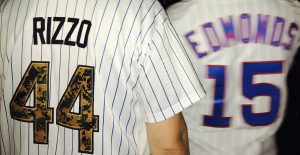 Dave Vainberg, 2004 Glenbrook North High School of Palatine
wears his Anthony Rizzo jersey at the Landmark Inn Bar and Grille to cheer on the Cubs during game 7 of the World Series Nov. 2

Their son is Gianni Pappas, jersey No. 69 and an offensive/defensive lineman on the varsity Spartans football team.

“I think it’s an omen,” she said of the numeric jersey reveal.

“There’s no other option.”

Pappas got her wish. As she predicted, the Chicago Cubs are the 2016 World Series champions 108 years later. 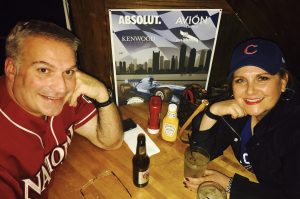 Bill and Anna Pappas of Northbrook at The Landmark Inn in Northbrook on Nov. 2, 2016.

Now are you ready for some football? 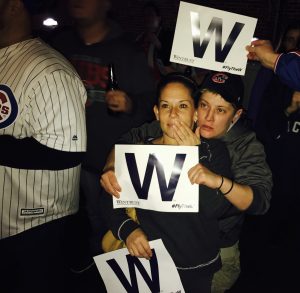 Christy Rivera of Northbrook shortly before the Chicago Cubs winning the World Series in the 10th inning. Fans gathered at the Landmark Inn Bar and Grill in Northbrook. 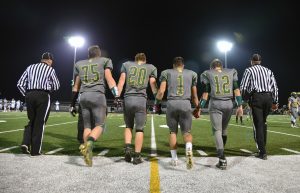 All four jersey numbers add up to 108. From left to right, at the Oct. 28, 2016 Glenbrook North High School varsity football game versus Simeon at Lutz Stadium in Northbrook, the four senior captions of the GBN team enter the field with referees. Bob Pieper, head varsity football coach,. for the coin toss. From left, are (No. 75), Joe Jancaus, (No. 20), Gerry Luc, (No. 1) James Mercouris and (No. 12) Kevin Burnside.