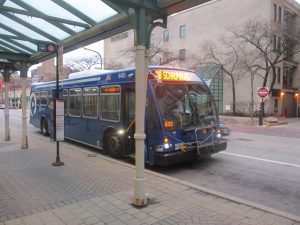 Pace is proposing changing Route 208 routing between Old Orchard Mall and Davis Metra/L station so that it would fill the gap left by elimination of CTA Route 205. (Photo by Igor Studenkov/for Chronicle Media)

Virtually all of the residents who spoke during the April 24 public hearing decried the proposed overhaul of CTA and Pace routes throughout Evanston and other North Shore suburbs.

For most speakers, the biggest concern was the proposal to remove CTA Route 205, which provides direct link between northeastern Evanston and Evanston Township High School. Pace is proposing to change Route 208 and 213 to fill some of the resulting service gaps, with only special Route 213 trips following Route 205’s path. As the parents, students and school officials who spoke during the meeting saw it, this was inadequate, and urged CTA and Pace to keep Route 205.

The meeting also saw multiple speakers taking issue with other aspects of the changes, arguing that they reduced mobility for people served by the current routing, especially for seniors and people with disabilities. The CTA and Pace officials promised to take the feedback back to their respective governing boards. The final decision is expected to be made sometime this summer.

The proposed changes are the first phase of the North Shore Coordination Plan. As previously reported by the Chronicle, the idea was to restructure CTA and Pace bus service to serve the area as efficiently as possible, meeting the current ridership demands and reducing duplication between the two systems. Phase 1 focused on the changes to routes serving Evanston and suburbs directly to the north of it.

Evanston Township High School is one of the several high school districts throughout suburban Chicago area that doesn’t have its own school buses. Instead, students take CTA and Pace buses. In many cases like this, the two transit agencies set up special trips that follow a different path than they usually do, picking up and dropping off students before and after school in places that otherwise don’t get direct bus service to the area schools.

Route 205 is a weekday-only bus that runs parallel to the Purple “L” line tracks along Chicago Avenue in Evanston between Howard and Davis “L” stations, then along Church Street until it reaches ETHS, then west on Dodge Avenue, then north on Emerson Street/Golf Road until it reaches Westfield Old Orchard Mall, then continues north along Grant Street until it reaches Skokie’s Cook County courthouse. Before and after school, it veers off the usual routing west of ETHS to pick up some students along Evanston portion of Grant Street. 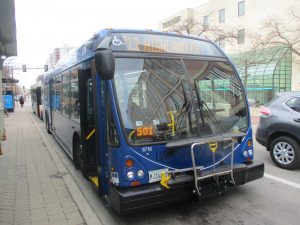 When Pace Route 213 bus arrives at Davis Metra/L station, riders have to check the destination sign to see whether it’s heading for Northbrook Court or Highland Park Metra station. Under the proposed CTA/Pace restructuring, all Route 213 buses will travel to both destinations. (Photo by Igor Studenkov/for Chronicle Media)

Route 208 primarily runs along Golf Road between Davis “L” station and Schaumburg’s Northwest Transportation Center. After it stops at Old Orchard Mall, it turns south on Skokie Boulevard and continues along Church Street, serving ETHS along the way. Unlike the other two routes, it operates seven days a week.

CTA and Pace propose removing Route 205 altogether. To make up for the loss, Pace would extend Route 213 south along Chicago Avenue, taking over Davis-to-Howard portion. Meanwhile, Route 208 would be shifted to mirror Route 205’s Davis-to-Old Orchard portion. CTA’s rush hour only route 54A will continue providing service between the mall and the courthouse — though, as previously reported by the Chronicle, the two agencies ultimately plan to replace it with a route tentatively designated as Route 641. Pace spokesperson Maggie Daly Skogsbakken told the Chronicle that it would be part of the next phase of the plan.

While Route 208 wouldn’t make Route 205’s school trips, Route 213 would make special school trips that mirrored Howard-to-ETHS portion of Route 205 — but it would only make one morning trip and one afternoon trip.

Meanwhile, Route 312 would be reconfigured. Instead of the two branches, all buses would travel to Northbrook Court, then use the Edens Expressway to travel to Highland Park and use Central Avenue to reach the Metra station. This means that, in practice, the trip to Highland Park would take longer — and the current stops between Lake-Cook Road and the Metra station will lose service completely.

Pace also plans to change the service frequency. Under the current schedule, during weekday rush hour, the buses run roughly once every 15-20 minutes between the Davis “L” station and Lake-Cook Road and once every 30 minutes on the branches. The rest of the time, the buses run every 30 minutes on the main line and once an hour on the branches. Under the new schedule, during rush hour, the bus would run the buses once every 20 minutes between Davis Street and downtown Winnetka and every 40 minutes on the portion to the north. The non-rush hour frequency would remain the same — and, since there would no longer be two branches, that would mean more frequent off-peak service.

During the April 24 public hearing, which was held at City of Evanston Levy Senior Center (300 Dodge Ave.) CTA and Pace officials argued that the changes would represent an improvement for Route 205 riders, noting that Chicago Avenue residents would get Saturday service and the riders along the western portion would get weekend service. They also noted that both routes operate later then Route 205, so riders would be able to take advantage of public transit later in the evenings.

While acknowledging that the changes would reduce a number of direct trips to ETHS, they argued that there were several less direct, but still viable alternatives. That included taking Route 213 or Purple “L” Line to Davis Street and transferring to either Route 208 or CTA Route 93. The later stops at ETHS before heading south on Dodge.

But that didn’t mollify majority of residents at the hearing, who insisted that Route 213 school trips wouldn’t be nearly enough to address student needs.

Kathy Flint is one of the several parents of ETHS students who spoke during the meeting. She said that, when her daughter told her that CTA was considering ending Route 205, she couldn’t believe it because of how many students depend on it.

“Southeast Evanston kids, a thousand school kids, they’re going to lose out on their services,” she said. “It’s not fair, it’s not good, and I’d be happy to help [the transit agencies] figure out the right thing.”

Joanna Fine, whose daughter also attends ETHS, suggested that, if off-peak ridership for Route 205 was low, CTA could make it rush hour only, like Route 206, since it was clear from her daughter’s experience and the experience of other parents that testified that there was demand during those hours. 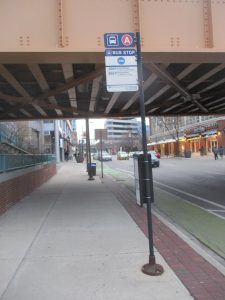 “I can rely on 205 to take me home from school anytime,” he said. “These changes will eliminate that option.”

“This is a terrible idea,” he said. “This is about the children at the high school. They depend on these buses.”

Having just one school trip in each direction, the superintendent insisted, doesn’t address the overwhelming demand.

“Easily, three buses are packed every morning and every evening,” Witherspoon said. “And to think that all those students [would be] packed in one bus — it can’t happen.”

Many residents also argued that alternating Route 208 would make it harder for them to get to jobs and recreational destinations throughout downtown Evanston and Skokie. Reaching other, nearby routes, they argued, would be hard during winter and it would be generally more difficult for people with disabilities.

Rebecca Schachter, a job developer for Little City, a Chicago-based non-profit that assists people with developmental disabilities, said that her clients were worried about how elimination of Route 205 would affect them.

“A lot of those individuals are using 205 to get to work, and they’re very concerned about how this will jeopardize their chances to get to work,” she said.

Other speakers argued against changes to Route 213. Frank Lamberti, the Transportation Manager at New Trier High School — which, like ETHS, doesn’t have school buses — argued that reducing its frequency north of downtown Winnetka would hurt his students.

“This will definitely impact students’ day-to-day work to school life,” he said. “After school, before school, buses fill up quickly. [Reduction of service] results in overcrowding and students coming late to school as well.”

Jean Dames, of Highland Park, said she and her husband live near Route 213 and that they’ve been using it for the past 40 years.

“My husband, every morning, takes the bus to work, and it obviously makes a big difference to our lives,” she said.

Dames suggested that, instead of having Route 213 use the Edens Expressway to get to and from Highland Park, it would take a loop, using the Edens to go north and using Green Bay Road to return south.

Mike Purcell, a Pace bus driver who is frequently assigned to Route 213, said that Pace’s ridership surveys underestimate how many students use Lake-Cook Road-Highland Park segment. He also felt that, during the winter, that was “a bad stretch of road.”

At the conclusion of the hearing, Daly Skogsbakken told the Chronicle that, while the service changes would significantly reduce direct service, the two agencies clearly didn’t communicate that there would be many alternatives, even if they are alternatives that involved transfers.

As Daly Skogsbakken noted, both CTA and Pace offer discounts for high school students. But the way those discounts work differ. On weekdays, between 5:30 a.m. and 8:30 pm., CTA lets students pay 75 cents per trip for both buses and “L” trains and make transfers for 15 cents, while Pace lets students pay $1 per trip and 20 cents for transfers. This means that, no matter which routes students use, the amount they pay per trip will increase. If they use Pace routes as the first portion of the trip, they would pay 25-45 cents more per trip depending on whether they make a transfer. Even if they stick to CTA, they would still have to pay extra 15 cents to make a transfer. Assuming two trips per day during weekdays, that would add up to an extra $6 per month.

Pace does offer something CTA doesn’t — a $30, 30-day reduced fare pass. Unlike CTA discounts on one-way trips, the pass works on weekends and late evenings, too.

If the students use it to make two trips a day every weekday, that would add up to 75 cents per trip, but the value could be potentially much greater if the students use it during weekends. However, because the pass is Pace-only, students would have to pay for a full trip if they transfer to a CTA bus or an “L” train.

In response to the follow-up questions from the Chronicle, Daly Skogsbakken indicated that, if the changes go through, Pace would be encouraging students to buy the 30-day pass.

At the conclusion of the hearing, officials from both agencies said that everything they heard will be considered before their respective Boards of Directors make the final decision.

“Everything that was said today will be typed up,” said Chris Canning, who represents Cook County North Shore suburbs on Pace’s board of directors. He added that those comments will be part of the report that will be presented to the board during its May 9 meeting.

Both boards expect to make the final decision sometime this summer, before 2018-19 school year begins.