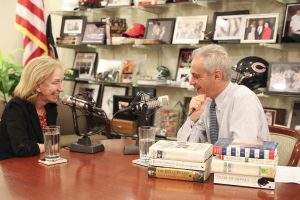 On his “Chicago Stories” podcast, Chicago Mayor Rahm Emanuel welcomed presidential historian Doris Kearns Goodwin to City Hall to talk about her new book, “Leadership in Turbulent Times,” as well as the lessons of the past, the responsibility of historians, and their shared dream of creating a sense of national purpose through universal national service.

As timely as her book’s release has been, Goodwin actually began putting it together five years ago as a study on the leadership qualities of her past subjects — Abraham Lincoln, Theodore Roosevelt, Franklin Roosevelt and Lyndon Johnson — and why they were so effective during their own turbulent times.

Goodwin said that each leader faced a country that was profoundly divided across political, economic, social and cultural lines, where the very survival of democratic government was in doubt. As Goodwin told Emanuel, “maybe the past tells us the future,” and helps us understand it as well.

“One of the things I like to think about this book now is that we feel so unmoored at this juncture,” Goodwin said. “My hope is that what you find from history — even if I’m not predicting the future — is that America has gone through really hard times, and as long as you have the right leader in place, and as long as you have citizens who are active during that time, we can get through.”

She said the leadership characteristics of each of her subjects were as varied as the leaders themselves, but what they all shared was a political temperament composed of the humility to learn from their mistakes, the empathy to understand the feelings of others, and the ability to communicate in a way that allowed people to trust them, along with sheer resilience.

“All these qualities make up a person’s basic temperament — their attitude toward life — and it’s the most important thing to look for in a leader,” Goodwin said.

Yet, for all the importance of leadership, Goodwin and Emanuel also spoke about the need for infusing our country with a sense of national purpose through a program of universal national service, which every young person would participate in for a short period following high school.

“I believe this so strongly,” Goodwin said. “People from the cities go to a rural area, people from the rural areas go to a city, and then you live with a host family … it’s the most important thing we can do. It would help with mobility for kids, it can get them money to go to college or vocational school or wherever they’re going to go after this, and they’ll learn other people.”

As Emanuel himself noted, this wouldn’t be a hard sell. “I’ve road tested this,” the mayor said. “All walks of life are for this — you’re pushing an open door.”

The full episode includes Goodwin and Emanuel talking about the importance of failure, her love of Chicago, the rise of cities, and, of course, the leadership role of presidential advisers, who, as the mayor joked, “without them, let’s just say these men were lost!”

Individuals can listen and subscribe to the Chicago Stories podcast on Apple Podcasts, SoundCloud, and Spotify.