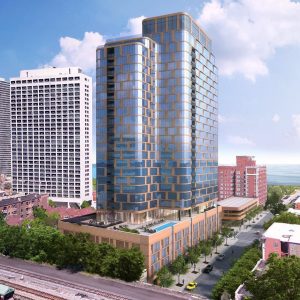 An artist’s rendering shows the 27-story, 250-unit development proposed in Chicago’s Hyde Park neighborhood. Members of the Chicago Plan Commission took exception with the developer failing to commit to a certain number of minority- and women-owned businesses working on the project in the racially diverse neighborhood. (Photo courtesy of Chicago Department of Planning and Development)

A Hyde Park development failing to commit to a certain number of minority and women workers on the project has some city officials pushing for mandated hiring number reports for all projects going forward.

The proposal for a 27-story, 250-unit building in the diverse Hyde Park neighborhood got approval from the Chicago Plan Commission on April 20, but not before two commissioners, Leslie F. Bond Jr. and the Rev. Albert Tyson, voted against the measure and one, Linda Searl, gave it a “very reluctant ‘yes.’”

The project at East 53rd Street and Cornell Avenue could be the catalyst for mandated hiring numbers on any future developments that need city approval.

“We need to explore options that developers don’t veer from what they say (regarding hiring of women and minorities),” said David Reifman, commissioner of the city’s Department of Planning and Development. “We need more confidence that developers are meeting parameters. We need to be more systematic. This is economic development. We are dealing with this consistently.”

Peter Cassel, director of community development for MAC Properties, developer of the project, said the firm has every intention of having minority- and women-owned firms on the project. However, he noted, that because city funding is not being sought for the project he was reluctant to say the firm would definitely meet the 26-and-6 guidelines.

Cassel said the firm has exceeded those guidelines in its work on a Hyde Park project just two blocks from the 250-unit development, which will include 10,000 square feet of first-floor retail space.

With projects not seeking city subsidies, Cassel said, “they are not city-regulated, but Ald. (Leslie) Hairston (5th Ward) has been very certain that we must meet and provide diversity participation in our projects. We did that when we did the full rehabilitation of The Shoreland (luxury rental apartments) at 54th and the lakefront. We are currently doing that as we build Solstice (a 26-story development) at 56th and the lakefront … We intend to continue to do that with this project.”

He said while the Solstice project may not be at the 26-and-6 numbers, it does have a strong representation of minority- and women-owned firms on the job.

Cassel said MAC intends to not only hire minority- and women-owned firms for the 27-story development, it plans to hire people from Hyde Park and surrounding mid-South Side neighborhoods.

Commissioner Lucino Sotelo said the company failing to say it will meet the 26-and-6 numbers on the project is disheartening.

Commissioner Daniel Sih said knowing just how developers follow through on hiring promises is important and a reason for hiring reports.

“We are concerned with what is happening in local communities and the city and what is not happening,” Sih said. “Requiring reports is certainly a possibility.”

Bob Israel, an outspoken resident who attends many Plan Commission meetings, said there is no accountability with developers in the city.

“When all these developers come here, they make all these promises. They talk about how there is going to be diversity,” Israel said. “They come here and say one thing and do another in the field. They have short memories.”

He said developers are often not sensitive to the Chicago communities in which they are working. He said he has been working with one developer in the Hyde Park area for years, trying to get more local people involved in the project.

“I’m watching these high rises. I’m watching these buildings being built. The city is not even going to benefit off of these high rises,” Israel said. “You’ve got people coming to work at 6 in the morning. They don’t even live in the city. They bring a lunch box and a full tank of gas. They don’t even buy anything in the city. They come, drain all the resources and go home. They just don’t care.”