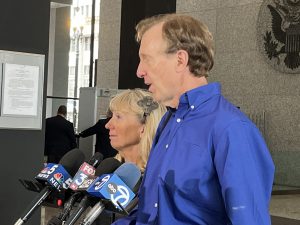 Debbie Curran and Bill von Wiese, siblings of Shiela von Wiese Mack, speak to reporters after their niece, Heather Mack, was denied bond by a federal judge in Chicago on Dec. 8. Heather Mack is accused of murdering her mother Shiela. (Photo by Bill Dwyer/for Chronicle Media)

Heather Mack will remain in federal custody until her trial date in late July, a judge ruled Thursday, Dec. 8.

In urging Kennelly to allow Mack to live with long-time family friend and Beverly Hills socialite Diana Rouque Ellis, Mack’s lead defense attorney Michael Leonard, argued that there was no evidence whatsoever that Mack had ever been violent toward anyone but her mother.

As Rouque Ellis listened in on the proceedings via teleconference, Leonard contended that Mack was not a flight risk, having no passport and no means to travel.

But prosecutor Ann Marie Ursini hammered away at Mack, listing an array of past behaviors that she said suggested she was highly prone to violence in the face of frustration and opposition to her wants and desires.

Ursini also noted pointedly that even Mack’s proposed legal custodian Roque Ellis, “doesn’t have faith in Heather, “noting that Leonard had tried to get Rouque Ellis to put up a cash bond or property as collateral, but she declined.

Both of Sheila von Wiese Mack’s siblings, Bill Wiese and Debbie Curran, made statements before the court, urging that Mack not be released on bond. While it’s hard to tell how much such testimony impacts a judge’s decision, their pleas were emotionally compelling. Both characterized Heather as a cold and calculating person and congenital liar who could not be trusted.

Heather, Wiese said, was “well-traveled, savvy and resourceful,” and would be able to talk people of means into helping her. He also noted that Mack had the phone number of her mother’s estate lawyer and had called him from jail in Indonesia to inquire into accessing the trust.

“What 18-year-old has the phone number of her mother’s estate lawyer,” Wiese asked.

Calling his niece “brutal, manipulating and narcissistic,” and he told the judge, “To release Heather would shatter our sense of security.”

Debbie Curran’s daughter has been granted temporary custody of Mack’s daughter Stella by a Cook County court and lives with her in Colorado. Curran’s voice quavered as she fought back tears while testifying about the trauma and despair her sister endured in the years leading up to the murder.

But despite her tears, she too was withering in her characterizations of her niece. Mack, she said, “will appear frail and weak,” but it is, she said, a ploy. “She is a master manipulator and can come up with this look on command,” Curran said.

Mack, who has spent 13 months in the Metropolitan Correctional Center, sat stoically within eight feet of Wiese and Curran as they spoke. The only time she appeared to show any emotion was when Curran told the court that she feared her niece might harm her and other family members if released.

“I fear for the safety of my daughter and two grandsons,” she said.

In his response to Wiese and Curran’s remarks, Leonard argued that Mack “has an eight-year track record of following rules,” and told the judge, “She will do whatever the court tells her.”

But Kennelly was unpersuaded. While careful to make clear he didn’t question Rouque Ellis’s basic personal qualifications, he said, “I don’t think she’s up to the job in this situation.”

In remarks to the media afterwards, Leonard called Kennelly “the gold standard in this building,” and said he respected the judge’s decision, but was disappointed.

Of Mack, he said, “her hopes were certainly up going in,” to the hearing, and that the denial was “very, very hard on her.”

Mack, he said, was “very, very despondent at not having the opportunity to be out” and not being able to be with her child.

Wiese and Curran spoke briefly with the media afterwards. He said he and Curran wanted to be present in court “to give our sister a voice.”

Facing Mack at the hearing, he said, “is one of the necessary steps for justice and healing for our entire family.”

“It was difficult, but it was a process we have to go through.”