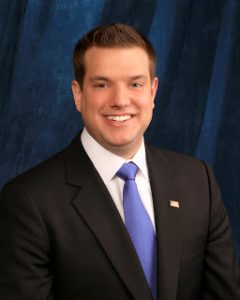 Christopher Getty, the Mayor of Lyons, may have been “serving two masters” in May when he voted — wearing his second hat of Township Supervisor — to approve an intergovernmental agreement with the village for a summer youth jobs program, says a Summit attorney.

Ted Bojanowski, a lifelong resident of Summit and former Argo HS D217 School Board member, said in a public letter that Getty is holding two “incompatible” offices by serving as the head of the village board and the township trustees simultaneously.

“I have read all of the relevant case law and Illinois Statutes and the Illinois Constitution. I am convinced that a vacancy exists and that the Lyons Village Trustees need to appoint an Acting Village President,” Bojanowski wrote.

Getty did not respond to messages left for comment.

Reached at home, Lyons Trustee James Veselsky said he hadn’t received the letter and didn’t know anything about it. Other trustees didn’t return calls and messages for comment.

Residents of the city sued 6th Ward Ald. Keith Price in a “quo-warranto” lawsuit for refusing to step down from his elected positions.

The issue of incompatibility arises in a situation where an elected official could act in a way that conflicts with the interests of either one of the public bodies served.

“[I]nstead of examining whether there has been an actual conflict in the two offices in which a person is serving, Illinois courts look to whether there will eventually be a conflict,” wrote Appellate Court Judge Justice Steele in 2011.

Lyons village attorney Burt Odelson said the idea that the mayor of Lyons would have to step down was “ridiculous, a non-issue. There is no conflict. I’ve been through this before,” Odelson said.

“Ted is a pot-stirrer who’s just going to rack up more attorney’s fees for the township and the town,” Odelson said.

Odelson gave the example of the many-hat-wearing Steve Landek, the 12th District state senator who is also mayor of Bridgeview. Landek faced the same issue when he was appointed to Township Supervisor in 2010, Odelson said. Landek worked his way up from park district commissioner to Village Trustee to Democratic committeeman and eventually to village president in 1999. Landek then ran for and won the office of township highway commissioner from 2005-09 until he was kicked upstairs to Township Supervisor in 2010 when Supervisor Russ Hartigan was appointed circuit court judge.

Landek was holding down both mayor and township supervisor offices in June 2011 when the appellate court opinion was released. State Sen. Louis S. Viverito (D-Stickney) then announced he was stepping down mid-term, and Landek took Viverito’s place in the General Assembly. (There are no compatibility conflicts recognized between statewide and local offices). At that point, Landek walked away from the supervisor job, saying he needed to focus on his other duties.

Odelson said even if the Price case was valid, the law wouldn’t apply to mayors.

“A village trustee and a township trustee might be incompatible because they’re both legislators, they vote,” Odelson said. “A mayor is an executive.”

But a ruling from 1994 found township supervisors’ roles are incompatible with another executive office: County executive.

The Illinois Attorney General’s office keeps a tally of elected positions that are considered incompatible (through 2011).

“Generally, the law is if an elected official has two offices that permit him or her to vote twice on the identical issue from different political locations, then that’s a conflict,” Braden said. “Anytime there’s a conflict, or a perceived conflict, the people who really suffer are the voters.”

Braden said the Cook County State’s Attorney’s office stepped in to take over the case, as is their right under state law. The AG’s office can also file a quo warranto case.

“We were happy we could make a difference,” Braden said.

Meanwhile Price bounced back and was reelected to the office 6th Ward Alderman in 2011 with more than 70 percent of the vote. Price is still active in school board politics and challenged several candidate petitions for the SD152 races this year. His wife, Tamika Price, serves on the library board.

It remains to be seen whether Getty, in his mid 30s, will acknowledge a challenge to his hold on both the mayor’s office and the township supervisor’s role. If he stepped down from the village president job, he would have to give up a salary of $25,000, plus $12,500 per year for serving as liquor commissioner. The township supervisor job paid around $40,000 in 2016, according to the Better Government Association payroll database.

It’s unclear whether Bojanowski’s letter will have any effect, or if the Cook County States Attorney’s office would take up the case as it did in 2011.