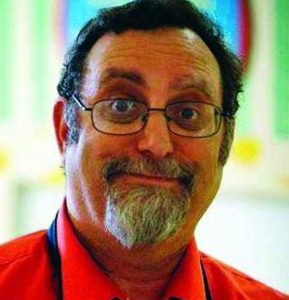 On a stinking hot summer day, my father struggled to install a window air conditioner in the front room. It was not a good fit.

“Run down to the hardware store and get some Mortite,” he said, fishing a dollar out of his pocket. Mortite is “rope caulk,” thick, sticky stuff that comes already extruded, so you don’t need a caulking gun. My dad had about six tools in those days, and a caulking gun was not among them.

“You sure this is enough?” I asked, having been caught short at a store about three years before, when I was 8. “Way more than enough,” he assured me.

It was a beastly run in the heat, but I looked forward to getting to East Maine Hardware. It was my favorite place, stocked with exotic tools like electric drills. At home, we had a hand drill with a wooden handle and a little crank on the side.

This time, I barely glanced at all the fantastic devices, because I was on a mission, with the whole family waiting to turn on the air conditioner and sit in front of it like it was a television set.

I put the Mortite on the counter. “A dollar-one,” the man said.

“Holy cow, I just have a buck. Can I bring the penny later?” I asked.

“Yep, and you can take the Mortite later, too,” he said, picking it up off the counter, and leaving my forlorn, sweaty dollar behind. The other guy behind the counter chuckled, and the first guy laughed harder.

“My father said a dollar was plenty,” I said, thinking that he was right. It didn’t look like the caulk was worth a dollar, not in those days, when you could get a hamburger for 15 cents.

“Your father should have given you enough money,” the second guy said, laughing again. “I think he did give me enough money,” I said under my breath.

The jokes and snide comments continued. There were now several men around the front of the store, some laughing, some staying out of it. Even a kid could understand what was going on. They saw the patched clothes, the loose flap on my shoe, the amateur haircut. They were making fun of me because I was poor.

We had moved from Chicago to Niles, which was no ritzy town, but the rent was higher, and kept going up. Everything seemed to cost more than it was worth.

I suddenly felt very small. I had the sensation that I wasn’t tall enough to see over the counter. I realized that I would have to leave and come back with the penny, and give it to these hyenas on my knees.

A voice came from behind me. “Give him the flipping Mortite,” I heard. The man didn’t really say “flipping.”

Behind the counter, my main antagonist said, “Yes, sir.” A large man in a tan work uniform and two heavy tool belts put some pipes on the counter.

“You ought to be ashamed of yourselves,” he said.

The plumber turned around to shake my hand. “I’m Mr. Marion,” he said, aware I might not recognize him out of context. “I’m your scoutmaster.”

Irving Marion clapped his big right hand on my shoulder. “Say hello to your dad for me,” he said.

People say that sexual abuse of over 12,000 Boy Scouts was already underway when I was a Scout. I don’t doubt it, but I never saw that.

Scouting programs in Illinois vow to continue despite bankruptcy

I saw Mr. Marion and other men who worked hard all day but still found a little time to help boys grow up to be men instead of jackals.

I also saw the beauty of life under the dome of the sky. I saw animals playing in the shadows of oak forests. I watched hawks circle in the air before plummeting toward a ground squirrel like a Curtiss Helldiver.

I scrubbed my clothes on a washboard. I learned to cook over an open fire, on a coal stove, and in a kettle buried in the soil. If you can do that, cooking on a Kenmore is a cinch.

Part of the reason the BSA has taken this course is the enormous debt likely owed to the boys harmed while under the deficient protection of the organization. There’s also the likely intention of limiting the number of victims who will join those who’ve already filed, though it may not work out that way.

Scouting’s financial underpinnings were weakened before the flood of lawsuits, because there isn’t as much interest as there used to be, even now that girls and gay boys are allowed under its big tent.

Membership fell long ago as boys turned to indoor pursuits. In an attempt to get them back and bring in more funding, the BSA reportedly borrowed significantly to build The Summit Bechtel Family National Scout Reserve, a huge West Virginia venue that is as much carnival as camporee.

It used to be simpler.

It cost us relatively little to be Scouts. If that weren’t the case, we couldn’t have done it.

When we’d arrive at a campground, there was nothing there but grass and weeds and a latrine, surrounded by trees. We’d walk into the woods to gather logs for the fires and branches for kindling and tent stakes.

Hand axes were borrowed to rough out the stakes. Everybody had a knife to trim the notches for the ropes.

The tents had no floors, so the ground cloth went down first, before the wooden tent poles were lifted and the ropes pulled taut. Don’t scratch the canvas. You don’t want leaks.

I shunned Scouting’s merit badges, ranks and most of its other militaristic trappings. But living outdoors for a few days at a time was a revelation, an education and a balm.

Boy Scout camping isn’t like civilian camping. The BSA owns campgrounds separated from cities, and off-limits to strangers’ RVs and other imitation outdoorsy-nesses. We hiked and swam out of sight of the things of man.

There is no question that the Boy Scouts made me a better human being.

I’m not necessarily referring to the Boy Scout Law, which famously instructed us to be trustworthy, loyal, helpful, friendly, courteous, kind, obedient, cheerful, thrifty, brave, clean and reverent — though that helped.

I’m indebted to the Boy Scouts for giving me the know-how and confidence to do things I might have never done without them.

I could find my way through the woods with a map and a compass. I cut wood with a long axe and a two-man saw. I tracked animals, and started a fire, at least once, by rubbing two sticks together.

Boy Scouts have long been the acknowledged experts of first aid, aside from actual doctors and nurses. When the methodology of cardio-pulmonary resuscitation changed about 60 years ago, it wasn’t really accepted until it went into the Boy Scout Handbook.

We kidded that the Scouts were so committed to first-aid training because that meant the handbook had to be regularly updated with the latest stuff, and the book isn’t cheap.

The Scouts drive training by staging regional and statewide competitions, to see how many fake injuries and illnesses we could cure without our fake patients dying. One of these was the first thing I ever won. I still remember how that felt.

When there’s a disaster, like a car plowing into a storefront, most people who have managed to avoid injury instinctively run away. But not everyone.

Medical personnel, cops and firefighters have been trained to respond to such matters, and they run in the opposite direction.

They run toward the blood and the crying and the screams. And often, right alongside them, is a guy who keeps a threadbare green suit in a dresser drawer even though it’s been a long time since it fit.