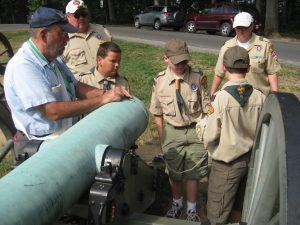 Boy Scout members visit Gettysburg, Pennsylvania, during a Scout trip. Area councils say that their programs won’t be affected by the bankruptcy filing by the national organization. (Chronicle Media photo)

Local Boy Scout councils say that activities and events  will go on as scheduled as the national youth organization goes through bankruptcy proceedings.

“Nothing has changed. We are focused on delivering services,” said Clint Scharr, Scout executive and CEO of the Three Fires Council, which serves nearly 14,000 youth in DeKalb, DuPage, Kane, Kendall and parts of Cook and Will counties.

Scharr said the business-as-usual theme was reinforced with 500 people filling the council’s Friday’s (Feb. 21) Gathering of Eagles at the Sheraton Lisle Hotel. The recognition banquet was to honor Eagle Scouts from the 2019 Three Fires Council Class of Eagles.

The Scout executive said that local councils are legally separate, distinct and financially independent from the national organization. He noted that unit meetings, activities, district and council events, other Scouting adventures and service project will take place as usual.

“In short, there will be no changes to the local Scouting experience,” Scharr said in a letter to Three Fires stakeholders. “… The Three Fires Council is well positioned to continue serving local youth and families for generations to come.”

The W.D. Boyce Council, which serves more than 19,000 youth in Central Illinois, said that local Scouting programs will not be impacted by the national changes.

“Scouting programs will still continue,” the organization said in a Facebook post. “Local councils are not included in Chapter 11 and are legal separate, distinct and financially independent from the national organization.”

The Pathway to Adventure Council, which serves more than 21,000 youth in the Chicago area and Northwest Indiana, also said programs and activities are moving forward as scheduled.

“The national organization of the Boy Scouts of America is the only entity involved in the Chapter 11 filing,” the Pathway Council said in a statement. “The Pathway to Adventure Council — which provides programming, financial, facility and administrative support to local units and individual Scouts in our area — is separate from the national organization. Our camps, properties and all local contributions are controlled by our council.”

Representatives of the national organization said they filed for Chapter 11 bankruptcy to equitably compensate sex abuse victim harmed during their time in Scouting and to continue carrying out its mission for years to come. The Boy Scouts of America said it intends to use the Chapter 11 process to create a Victims Compensation Trust to provide equitable compensation to victims.

Three Fires’ Scharr said that Scouting is safer now than it ever has been.

“Approximately 90 percent of the pending and asserted abuse claims against the BSA relate to the abuse that occurred more than 30 years ago,” Scharr said. “… The safety of children in our programs is the BSA’s absolute top priority. That’s precisely why over many years we’ve developed some of the strongest expert-informed youth protection policies found in any youth-serving organization.”

BSA officials issued an apology to abuse victims and said the trust they intend to create will provide compensation to victims while allowing the organization to go on.

“The BSA cares deeply about all victims of abuse and sincerely apologizes to anyone who was harmed during their time in Scouting. We are outraged that there have been times when individuals took advantage of our programs to harm innocent children,” said Roger Mosby, president and chief executive officer. “While we know nothing can undo the tragic abuse that victims suffered, we believe the Chapter 11 process — with the proposed trust structure — will provide equitable compensation to all victims while maintaining the BSA’s important mission.”

The BSA noted that, for years, it has funded in-person counseling for current or former Scouts who were victims of abuse, as well for the victims’ families. As an extension of their commitment to supporting victims, BSA officials said, they have formed a partnership with 1in6, a national resource for male survivors of abuse.

The partnership is aimed at expanding services in a multiyear effort so that victims of abuse can anonymously access support from trained advocates when and how they need it.

Leavitt: Boy Scouting is not what we may think it is