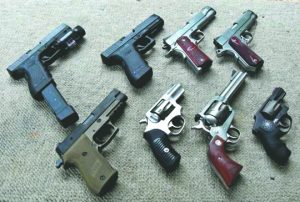 Forty-three percent of American households own a gun, with almost 400 million guns bought and paid for. In many places, it’s legal for them to be loaded all the time. They can put them in their pockets when they go to the supermarket. (Photo by Joshuashearn)

When my daughter was little, I told her, “American Girl dolls cause dread diseases. It just isn’t worth the risk. Lives are at stake.”

This abject lie postponed an expensive hobby for over two years.

But what if I hadn’t been lying?

What if a hobby practiced by millions of children and their parents really did cause the deaths of themselves and many innocents?

A significant segment of gun owners aren’t hunters and aren’t buying guns for protection, either. They just like having them around.

Collecting guns can be compared to collecting Precious Moments or Beanie Babies, only guns have the ability to hurl projectiles at twice the speed of sound.

I like guns. They’re pleasant to hold and operate. They look good, too.

I’m considering getting a few just to hold and admire.

But I shouldn’t. I kept a gun collection at home once before, and was unable to confine their use to fond gazes and caresses.

My friend Richie had asked me to store three guns for him, because he had made a terrible mistake in marriage, and feared it would become fatal for him.

He had two automatics: one cheap .22, and a bigger, relatively rare Polish model. The third weapon was also rare, a .44 magnum Smith & Wesson Model 29 revolver with a barrel over 8 inches long. It was identical to the hand cannon Clint Eastwood used to shoot robbers while eating a hot dog in “Dirty Harry.”

One by one, I carefully put the pistols on a shelf. When I got to the Polish automatic, it went off with a sound like the end of the 1812 Overture.

There were only two places the bullet was going to go. First, I checked to see if it was in me. No. Good.

So I knew where it had to be. I had just bought my parents a television set for their anniversary. It was still in the box.

None of the guns, I’d been told, were loaded. But I was not too surprised that Richie had neglected to check if there was a bullet in the chamber. He’s that kind of guy.

He had also increased the sensitivity of the trigger too much. Just picking up the pistol was enough to make it fire.

The apartment was burglarized a few days later. All that was missing was an old pocket watch and the .22 pistol. The other two weapons and the wounded television set remained.

A couple of days later, a disagreement between a bartender and a patron in a neighborhood tavern resulted in the patron drawing a cheap pistol to back up his argument. The tavern was owned by a couple of police officers. The gunman went to the penitentiary for a little over a year.

I’d had a gun collection for less than a week and it had resulted in one firearm accident, one punctured television set and one prison term.

Guns never helped Richie very much. While driving a cab, a 16-year-old would-be robber got excited in anticipation, and shot him in the back of the head before he and his sidekick even got around to demanding money.

The cab sideswiped a car and launched a mailbox before being stopped by a front porch.

Later, everybody was telling Richie how lucky he was, because the bullet had exited through his cheek without significantly damaging anything on the way that might be important in the future, like his brain.

As I write this, I’m sitting in a college campus apartment rented by five students who don’t own guns, but play with them on TV.

Last night, they played “Call of Duty” on Xbox 360. The video game started with John F. Kennedy, Robert McNamara, Fidel Castro and Richard Nixon attending a White House meeting. Suddenly beset by zombies, they arm themselves and split up to cleanse the building.

Upon shooting down a zombie, Kennedy exclaims, “I see an America, unafraid of beauty and grace … but you beasts aren’t helping!”

The students finished the game without actual violence.

They also play Dungeons and Dragons. I don’t think this will ever lead to injury or death, either. Unless, of course, they play with real dungeons and real dragons.

If they did, we would find some way to make it illegal. You can’t put people in dungeons. At least without an indictment.

But 43 percent of American households own a gun, with almost 400 million guns bought and paid for. In many places, it’s legal for them to be loaded all the time. They can put them in their pockets when they go to the supermarket.

It’s legal in most jurisdictions to own an AR-15 military-style rifle, which is really good for shooting people, and not much else. There are about 10 million of those in the United States. In some states, it’s permitted to sling one of those over your shoulder, and take it with you where you go.

In many places, if your firearm is stolen, and used for mayhem, you’re not responsible, even if you failed to report it missing.

We’re not required to buy any insurance to make people whole if our hobby accidentally causes anyone to get shot to pieces.

About 90 percent of people who attempt suicide live to consider trying to find a way to make life more livable. That’s not true for people who reach for one of their household’s guns. Almost all of them are successful.

If guns weren’t so handy, 15,000 more suicidal Americans might survive every year.

But maybe it’s all right for them to die.

Everybody needs a hobby.