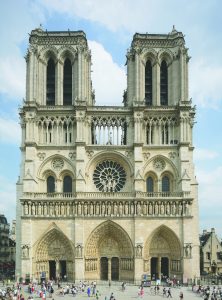 Notre Dame may be one of the most striking structures ever erected on the planet, yet it is as much a creature of the mind as it is of stone and glass and wood. (Photo by Peter Haas)

It took only two days for pledges of restoration money for the fire-ravaged Notre Dame Cathedral to reach a billion euros.

But a billion euros cannot bring it back.

That’s because it has never left. Notre Dame may be one of the most striking structures ever erected on the planet, yet it is as much a creature of the mind as it is of stone and glass and wood.

Money for the cathedral is pouring in from America as well as Europe. Some people found that bizarre, since three black Louisiana churches, recently torched by a racist, had raised only $50,000. A post-Notre Dame viral shame campaign raised that number to $1.8 million in two days.

But it’s truly a comparison of apples and oranges. While all four institutions are Christian, the reconstruction of Notre Dame is driven by feelings beyond religion.

France is not a very religious country, and hasn’t been for a long time. It’s said to be a culturally Catholic country, but about 10 percent of Catholics there regularly attend Mass. The rate at which American Catholics attend mass has dropped markedly, but it’s still almost four times as high as France.

Between 43% and 73% of the French consider themselves as atheist or having no religion, depending on which of six polls you believe.

Separation of church and state is taken more seriously in France than in America. When Francois Fillon, a conservative running for President of France three years ago, mentioned his Christian faith, most of his opponents attacked him as if he had vouched for necromancy.

But all bets are off with the cathedral. The French and their government will cooperate with the Catholics to get it fixed, because there’s no way for them, or the rest of the world, to imagine the City of Lights without its somber Gothic masterpiece of another era’s devotion to God.

Commercially, for France, it would be a big deal if it were gone.

“Paris needs Notre Dame,” restaurateur Aime Cougoureux told USA Today. “The tourists love it, too, especially Americans. When there are no Americans in Paris, it’s an economic crisis.”

Tourism is important to France, with over 10% of its gross national product due to visitors. But tourism is not all about foreigners. Seventy percent of tourism dollars spent in France are actually spent by the French.

They can’t miss knowing they’ve got a terrific country to vacation in. They live there.

Many of the people who sign the checks will die before the restoration is done, unless President Emmanuel Macron is right, and it can be finished in five years. But they’ll try to hang on until it’s completed. People in Paris and all over the world don’t just admire this building. They cherish it.

It’s not just because it’s a beautiful building, or because it’s historical, or a locus of faith. Paris has another big-time Catholic temple, the Sacré-Cœur Basilica, which is also all those things and, religiously, a slightly bigger deal.

But it’s not Notre Dame, filled with relics and art and studded with crazy gargoyles and flying buttresses. And even more than that: it’s imbued with the extreme cool that comes from status as a permanent cultural sensation.

That’s all about Victor Hugo.

Even before the cinders stopped glowing April 15, the French had made “The Hunchback of Notre-Dame” their favorite novel once again, through the magic of electronic bookselling.

His great 1831 novel, in France called “Notre-Dame de Paris,” extolled the value of the then-battered cathedral, and successfully lobbied for its restoration.

The book-buyers want to remember another time when the cathedral was endangered, and saved. But more than that, they want to be reminded of what made it much more than an innovative building for its time, full of expensive stuff.

Hugo wrote that the great religious edifices had been built to speak to an illiterate world, in chalice and window, sculpture and brick. But in the 15th century, in which the hunchback story was set, the torrent of words from the then-new technology of printed books was in danger of crowding out the voices of the monuments to faith, he insisted.

The chief antagonist of the novel, Notre Dame Archdeacon Claude Frollo, looked first at a printed book, then at the cathedral towers, and said, “Ceci tuera cela.” This will kill that.

It didn’t, partly because Hugo’s own printed book saved it.

And yes, our current disrupting technologies could eventually change religion from something practiced in the physical company of others to something celebrated on broadband, when celebrated at all.

But it’s too early to tell. And that eventuality probably has little to do with the rush to repair Notre Dame. You know in your gut that a similar reaction to the fire would have taken place if it had occurred before the Internet was invented.

Much of Hugo’s book, two long chapters, is a measured complaint about the neglect of Notre Dame, and medieval buildings in general. I doubt, however, that it would have been effective if, in his great tale of unrequited love, his protagonist was not able to share devoted affection with the cathedral itself.

“It was peopled with marble figures — kings, saints, bishops — who at least did not burst out laughing in his face, and who gazed upon him only with tranquility and kindliness,” wrote Hugo. “The other statues, those of the monsters and demons, cherished no hatred for him, Quasimodo. He resembled them too much for that. They seemed, rather, to be scoffing at other men. The saints were his friends, and blessed him; the monsters were his friends and guarded him. So he held long communion with them. He sometimes passed whole hours crouching before one of these statues, in solitary conversation with it. If any one came, he fled like a lover surprised in his serenade.”

Teachers of fiction-writing coach their students on how to turn a setting into a character. It’s taught in film school, too.

In the hunchback story, one of the most compelling in literature, the cathedral is more than a character. It is a constant presence.

Esmeralda dances sensually below the towers, attracting the forbidden love of Frollo, from above, igniting the drama. Almost all of the characters’ paths through the novel continually take them through the cathedral, and it’s Quasimodo’s whole world. The entire city seems to be turned toward Notre Dame.

Some other novels, and films, are also known for skillfully weaving a setting into almost every moment of a story.

What most of them have in common, however, is that their characters can’t get away. The settings, usually, are imaginary, and often horrible.

But Notre Dame was beautiful, and real, and people could come and go freely.

Because visitors could enter without a ticket, it is hard to tell where Notre Dame ranks among Paris’ attractions. But it’s probably in the top three or four.

Paris’ most-visited sites include several fantastic former palaces of despots that were turned over to the people after the French Revolution, including The Louvre and Versailles. Similarly, the nation’s new proletariat rulers moved the statue of the Virgin Mary out of Notre Dame, and converted it into a more secular people’s temple. But soon a new despot, Napoleon, gave it back to the Church, and it has remained Catholic ever since.

It will eventually be whole again, with a new spire pointing toward the heavens, once again reminding visitors of their faith, or, at least, the relationship their forebears had with a presence greater than themselves.