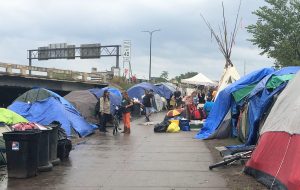 Hundreds of homeless tribal members of the Red Lake Band of Chippewa have been living along a Minneapolis highway. (Irv Leavitt photo)

Pamela Rivera, 51, one of the hundreds of mostly Native American people who lived there, had overdosed on heroin, and repeated injections of Narcan could not bring her back.

One Native woman told me she was devastated to lose Rivera, whom she referred to as her sister Pamela. Another spoke similarly, referring to Rivera as her aunt.

“Not my real aunt, you know,” she said to the journalist from Chicago, whom, she could see, was about to ask. “It just felt like she was an aunt. We were close like that.”

After Rivera’s death, a group of home-grown activists, Natives Against Heroin, swept through the campground. They drove out the residents of three tents who had been fingered by fellow members of the Red Lake Band of Chippewa as drug dealers.

This all happened during the first week of October, months after many of the homeless among the Red Lake people had started to set up camp along the expressway embankment at Cedar and Hiawatha avenues. They did so because they wanted to be near each other, and because they wanted to draw attention to the fact that they had no place to live.

The people in the tent city seemed to trust, or at least understand, one another because they actually knew them, or knew people who knew them. This is often a key to what it’s like to be a member of a relatively small tribe.

There are other ways to be a tribal member. I have an old friend whose grandfather was a Wisconsin Lac Courte Oreilles Ojibwe (Ojibwe is another name for Chippewa).  She is an official Tribal member, though she looks German and lives in Chicago.

The Tribe sends her a couple of hundred dollars every year, though she often sends it back, for donation to a reservation charity.

She never tells her fellow Tribal members how to run their business, but she backs them up when there’s a conflict. She’s as proud of her Native background as her European roots. Probably more so.

Warren reports that her mother was of an ancestral Cherokee family. Because of conflicts over that, Warren’s mom and dad were forced to elope, she said.

Decades ago, she identified herself on professional documents as Native American. I have found no one close to the situation who maintains that she ever got an advantage from it. But Donald Trump made it a big deal.

I suppose that’s because she’s a formidable fundraiser for the Democratic Party, and because she’s probably going to run for president one day.

Trump challenged her to prove her lineage though a DNA test, and if she did, he would give a million dollars to the charity of her choice.

She recently took the test, which revealed a few snippets of Native DNA. Trump kept his money in his pockets.

I don’t know why, or if, she thought he would make good. This is a fellow, who, in his business, has famously left invoices unpaid, driving contractors to the courts.

Some Native American leaders have complained not so much about Warren’s ancestry claim, but about her using a DNA test to prove it. They maintain that the test measures the wrong thing: dubious science instead of a combination of verifiable family background and biology.

The test didn’t identify Warren as a member of any particular tribe, but as having generic Native American background.

So now, they’ve said that she has circumvented their rules, to satisfy the President’s demand.

And their rules are important to them.

Native groups have an obvious right — and need — to decide who qualifies for tribal council status, reservation benefits, accurate history, and so on.

Just like the Jews of Israel, Natives fear they’ll lose what little they have, if they don’t make it clear who gets to be in the club.

Israel has arcane and complex rules governing “Who is a Jew?” so that the tiny country can continue to have a law of return allowing all Jews to be citizens. It’s similar for the indigenous people of the United States, who open their arms to those who can establish they are bona fide tribal members.

The people in the tent city hail from the Red Lake Indian Reservation in northwestern Minnesota. It’s unusual among reservations in several ways, including that residence there is strictly closed to all but the members of the tribe. That’s partly because it is not a reservation that Native Americans were herded to by those who conquered them; it was land held onto by indigenous people who did the conquering.

It is also considered the most isolated reservation in America, a condition that has led to a stagnant economy. That has, in turn, contributed to poverty, despair, drug addiction and suicide.

The despair peaked in 2005, when a 16-year-old resident shot to death seven high school students and three others, including himself.

As I walked from tent to tent in Minneapolis, none of the people I spoke with blamed their situation on the inherent difficulties of life they had faced, up north or in town.

They all said they were homeless due to drug abuse — theirs or a relative’s — and it was up to them to straighten out their own lives.

Some might say that was a much more dignified response than one would expect from people who had suffered a great deal of discrimination in the Twin Cities, where good jobs for Native Americans are relatively few.

That kind of dignity may be one of the reasons that people with scant Native ancestry, like the Senator, want to be thought of as belonging to a tribe.

And that’s a significant tribute to Native Americans as a whole.

But as long as this country discriminates against certain demographic groups, those groups will fiercely protect whatever individual identity they can preserve.

That’s all they have.