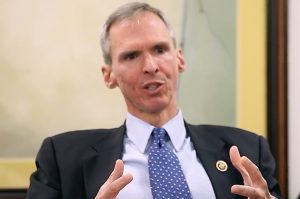 U.S. Rep. Daniel Lipinski (D-3rd), a member of the Problem Solvers Caucus, said he would not support Nancy Pelosi for speaker of the U.S. House without her adopting rules to change House governance. (The Daily Caller photo)

An Illinois Democrat congressman said he is holding back support of Nancy Pelosi for speaker of the U.S. House of Representatives until she commits to changes in the legislative body’s rules.

U.S. Rep. Daniel Lipinski (D-3rd District) has joined with eight other Democratic congressmen in creating a potential roadblock for Pelosi to again lead the U.S. House.

“We won’t be supporting Nancy Pelosi for speaker until we get a commitment to change some House rules and #BreakTheGridlock in DC,” Lipinski said in a tweet Nov. 23. “All we’re asking for is a commitment to common sense governing.”

Lipinski is a member of the Problem Solvers Caucus, a group of Republican and Democratic congressmen calling for changes in the way the House operates.

“We will only vote for a speaker candidate who supports ‘Break the Gridlock’ rules changes,” Lipinski and eight other members of the group’s Democrats said Nov. 23.

Caucus members have made a promise not to campaign against other members of the caucus and agree to vote together for any policy proposal that garners the support of 75 percent of the entire PSC, as well as 51 percent of both the Democrats and Republicans in the caucus.

The PSC cleared the 75 percent threshold on several occasions, including:

Lipinski, of Western Springs, and 10th District Congressman Brad Schneider (D-Deerfield) are the only Illinois members of the caucus.

Schneider has already thrown his support behind Pelosi as speaker.

“In this critical moment, given both the challenges and opportunities before us, I believe there is no one better equipped to lead us forward than Nancy Pelosi,” Schneider said in a statement.

The PSC’s Break the Gridlock rules include proposals to give fast-track priority consideration to bipartisan legislation.

“We care about reforming the institution so that Congress is actually able to get things done for the people back home,” U.S. Rep. Tom Reed (R-New York), caucus co-chair, said in July. “Due to the House floor being controlled by a select few, most members of Congress are not able to bring their ideas and proposals to the House floor for a fair vote that would allow us to begin solving some of the most contentious issues facing our country today.”

“We’ve seen time and again how our common-sense solutions get jammed up in a system built to empower the voices of a few extremists,” fellow caucus Co-Chair U.S. Rep. Josh Gottheimer (D-New Jersey) said in July. “Instead of letting obstructionists create roadblocks to bipartisan consensus, the American people deserve action on everything from infrastructure to immigration.”

“We will continue to work together to develop changes to the rules that will break the gridlock in Washington and deliver results for hard-working Americans,” Pelosi said in a statement.

A closed-door vote on Pelosi as speaker could occur as soon as Nov. 28.