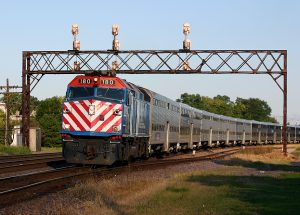 Metra has proposed raising fares in February as much as 25 percent in some cases to make up for increased costs and a drop in incoming revenue.

Taking Metra trains could have a little more money flying out of your pocket come this winter.

The rail agency has proposed raising fares in February as much as 25 percent in some cases to make up for increased costs and a drop in incoming revenue. If Metra’s board of directors approves the proposed hikes next month, most one-way, 10-ride and monthly tickets would see fare hikes in single-digit percentages, but some 10-ride, reduced one-way, reduced 10-ride and reduced month fares would see hikes in double-digit percentages, depending on zone.

Weekend passes would see the biggest hike percentage-wise, going up 25 percent, from $8 to $10.

Metra’s chief financial officer said that costs for the rail agency are expected to rise $30 million in 2018 at the same time funding from the Regional Transit Authority is expected to drop $15 million, creating a $45 million gap.

Of the $30 million in cost increases, $23 million is linked to labor, including a 3 percent pay raise for most employees, and fringe benefits.

“While we are consolidating jobs and not filling jobs and everything else, on the other side of that, we are getting constantly more and more regulations, and more requirements,” said board chairman Norman Carlson. “… We need to be honest and open about what is being mandated on us. We are trying to respond to these unfunded mandates that keep coming.”

If the Metra board approves the proposed fare hikes next month, it would mark the fourth consecutive year of fare increases.

Carlson said riders need to be aware of the cost drivers, such as unfunded mandates, that trigger fare increases. He said it is frustrating to have so many requirements put on the rail agency and money not supplied to meet those requirements.

He said the way the rail agency is funded needs to be changed.

“Metra has an unsustainable economic model,” Carlson said, “and is facing the worst financial crisis in its 33-year history. In addition to a chronic lack of adequate funding for capital assets, such as rolling stock and infrastructure, Metra is now faced with decreased funding for operations.”

“So instead of going up $10 million, they went down $15 million,” Farmer said of the RTA. “… Funding is falling, not what we had expected, not what we had hoped for, but we have to manage with that”

The proposed fare increases are expected to net Metra an additional $17 million.

Metra will also defer $12 million in capital improvements in order to create a balanced budget.

“We didn’t feel we could afford it this year,” Farmer said of pushing capital improvements off for a year.

Cutting capital projects did not sit well with all board members at last week’s meeting.

“We’re willing to sit here and talk about decreasing our capital by about $12 million to help offset increases in fares. OK, that makes sense if you’re trying to balance the budget for this year,” said board member Ken Koehler. “You tell us that maybe we can add that back next year. That doesn’t get us anywhere whatsoever. We just lost a whole year for a very small amount of money, quite frankly. So all we are doing is kicking the can. What’s going to happen when we have more and more mechanical breakdowns? … We are going to reduce $12 million, which is just nothing to balance a budget when we’ve got $12 billion in needs.”

The rail agency expects to save $4 million next year by not filling vacant positions and leaving some positions vacant when individuals retire in 2018. Metra is not proposing any employee layoffs at this time, Farmer said.

Board member John Plante said the agency needs to be careful not to let too many positions go unfilled as Metra is viewed as a “premiere” transportation service, according to rider surveys.

“We are the Cadillac, we’re not the Chevy,” Plante said. “That’s the way people look at us and in order to maintain that, it takes people. It takes an effort. This expectation from the public is ‘They’ll freeze jobs, it’ll be fine.’ The other thing that bothers me is ‘freeze salaries.’ We did that before. That didn’t work. We lost qualified people.”