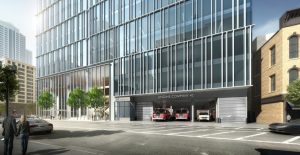 A three-story firehouse is proposed for Chicago’s River North neighborhood. The new firehouse would be part of a commercial tower at Dearborn and Illinois streets, improving safety for fire equipment leaving the station, according to fire officials. (Artist rendering courtesy of Chicago Ald. Brendan Reilly)

The proposal would generate a new Engine Co. 42 firehouse, funded completely by the developer, saving Chicago taxpayers $15 million. Subsequently, the developer, Friedman Properties, would demolish the existing firehouse and construct a 455-foot tower, with 614,000 square feet of space, at the southwest corner of Dearborn and Illinois streets.

“It will be a class A office building,” said Scott Seyer, principal with the Goettsch Partners architectural firm. “We feel we have done our best to assimilate the character and texture of the area and be respectful of the River North neighborhood.”

Seyer admitted it is a “complicated issue,” putting a commercial structure next to a firehouse.”

All loading for the new tower would take place through the alley to the south of the site, which would be managed by a fulltime dock master. Ambulances and smaller Chicago Fire Department vehicles would be able to access the new fire station through the alley, something that is not possible currently.

CFD would also have the ability to control the traffic lights on Illinois Street at both Clark Street and Dearborn to flush traffic from the block before exiting on a service call. Ald. Brendan Reilly (42nd Ward) said that the modern technology would better control traffic for the safety of residents, as well as allow fire personnel to limit the use of sirens to clear the street.

“The Fire Department will fully control both traffic signals,” Reilly said. “They will be able to flush the entire street before pulling trucks out.”

Deputy Fire Chief Donald Hroma said because the new firehouse will be on the corner instead of the middle of the block as it currently is, fire equipment will have an easier time exiting the station. With that, and the new station being set back, firefighters and paramedics should be able to travel the area easier, the deputy chief said.

“It will be much more safe,” Hroma said. 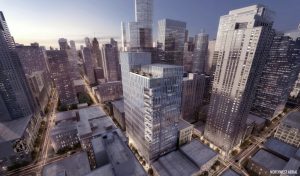 A 30-story commercial tower is proposed for Chicago’s River North neighborhood. A public-private partnership between the city and Freidman Properties would build a new firehouse in the area at no taxpayer expense. (Artist rendering courtesy of Chicago Ald. Brendan Reilly)

Seyer noted that the commercial tower would meet all city sustainability requirements.

A traffic consultant noted at a late July meeting on the proposal that the bike lanes on Dearborn would remain. The consultant added that only 50 parking spaces would be part of the tower plan, noting that most people heading to the tower would be commuters walking or taking public transportation to the site. The consultant said because of that the traffic impact caused by the commercial tower would be minimal.

Hroma said the extra space in the new fire station will assist the fire prevention staff housed there.

“Fire prevention will be on the third floor. They will gain more room,” Hroma said. “What they did 50 years ago is not what they do now. There is a lot more work now.”

River North resident Crystal Lynn questioned how firefighters would battle a blaze in the tower with their station right below the building.

Hroma said except for ensuring all equipment was pulled out of the station, a fire in the building would not cause any additional steps.

“We do have a staging area” for fighting fires,” Hroma said. “It would not affect the way we attacked a fire of any type,” Hroma said. “We protect the people who fight the fires and protect the buildings. When we get an alert, everything is the same for us.”

While residents had concerns about the project, no one ripped the plan and many gave it a thumb’s up.

“I think it is a fantastic idea,” said River North resident Jenny Faron.

Jason Friedman of Friedman Properties said that with picking up the firehouse parcel, the development company would basically own the entire block.