State police arrested Rev. Gregory Livingston and several other protesters on Labor Day (Sept. 3) as participants tried to march shortly past noon on the Cumberland Avenue ramp in Chicago. 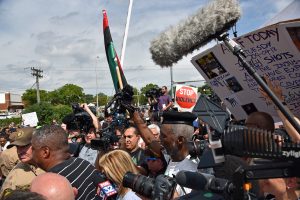 Shot 4
Far left, Rev. Gregory Livingston is about to be arrested by Illinois State Police at a Sept. 3 Labor Day peace protest on the Cumberland Avenue ramp along the Kennedy Expressway near Park Ridge. (Photo by Karie Angell Luc/for Chronicle Media)

The on-ramp feeds west into the Kennedy Expressway toward O’Hare International Airport.

The Sept. 3 protest originally called for a march for about a mile to the tollway portion near airport.

That plan was halted when a wall of Illinois State Police prevented that from happening.

Two bright Illinois Department of Corrections buses were seen parked along the ramp, sending a signal to spectators that this transportation was meant to accommodate arrests.

Despite the visuals and multi-department police presence, protesters left the public sidewalks at Cumberland Avenue and Higgins Road several steps to the south to walk on the ramp. The ramp had already been closed and blocked by police vehicular action. 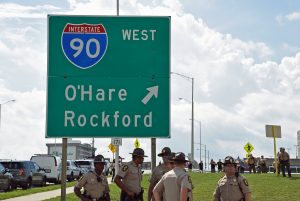 Illinois State Police stand guard at the corner of Cumberland Avenue and Higgins Road, but just north of the on-ramp to the Kennedy Expressway during a Labor Day protest on Sept. 3. (Photo by Karie Angell Luc/for Chronicle Media)

“This is the Illinois State Police,” said a police spokesperson via megaphone to the crowd.

“It is illegal to be a pedestrian on the interstate roadway.”

“We understand,” Livingston said, mixed in the crowd, replying as protest spokesperson to the loud warning.

“Please turn around and walk back,” continued the person behind the megaphone.

“We are not being treated fairly,” said a protester, who stood near Livingston in that tight cluster of participants, media and police officers.

Livingston began to chant and protesters joined in. 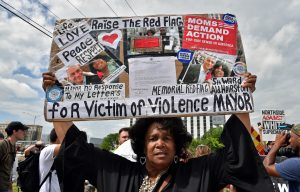 Sheila Clay of Chicago is an artist with a message during a Labor Day protest on Sept. 3 along the Kennedy Expressway near Park Ridge. (Photo by Karie Angell Luc/for Chronicle Media)

“Ain’t nobody gonna turn us around,” Livingston said.

Livingston and other arrestees kept on walking but then cooperated with police on the arrest process.

One arrestee was seen removing a backpack at police request. This was after Livingston told participants that they could step off the ramp to avoid arrest.

“Listen to me,” Livingston said minutes before, turning around from police to address protesters.

“We are also exercising our right to be arrested as citizens who believe that what we’re doing is right. 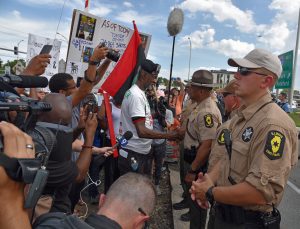 A handshake. A protester and police officer shake hands amid arrests that were already in process during a Labor Day (Sept. 3) protest on the Cumberland Avenue ramp along the Kennedy Expressway near Park Ridge. (Photo by Karie Angell Luc/for Chronicle Media)

“I need you all to remain peaceful,” Livingston said.

“If you have warrants, don’t you come up here.”

The anti-violence protest, like previous recent closure protests on Lake Shore Drive and on the Eisenhower Expressway, had a message about gun control plus other issues.

“We have to stop the violence,” said protester and artist Sheila Clay of Chicago.

“Put the guns down.”

While Chicago Mayor Rahm Emanuel continued to be called out for being ineffective and unresponsive to address Chicago violence, other elected officials and candidates for office were the subject of adverse signage as well. 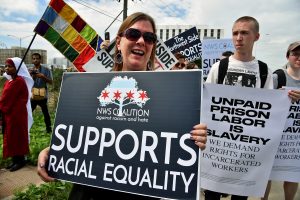 Marchers hold signs at the corner of Higgins Road and Cumberland Avenue as part of a Labor Day anti-violence and peace protest on the Cumberland Avenue ramp along the Kennedy Expressway near Park Ridge. (Photo by Karie Angell Luc/for Chronicle Media)

For Ken Justus of Chicago, the message was simple.

“I got old and I got unhealthy and I spent a lot of money on doctor bills.

Police have also been the target of criticism by protesters.

One protester was overheard catcalling Illinois State Police officers as they stood in line to barricade ramp access.

Officers kept quiet, not responding to the strong name calling by this one male protester. 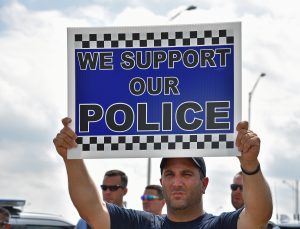 A protester stands in support of police at a Sept. 3 march on the Cumberland Avenue ramp along the Kennedy Expressway near Park Ridge. (Photo by Karie Angell Luc/for Chronicle Media)

“I support First Amendment,” Sposato said. “But, I’m not for breaking the law, and blocking the streets and expressways and disrupting peoples’ lives.”

Park Ridge neighbors congregated across Higgins Road to watch the event, several sitting on berms with their beverages.

Families, some with elementary-aged children, were seen on bicycles coming within yards of protesters near the ramp. Police also used bicycles.

Mariano’s, the grocery store across the street along Cumberland Avenue, had a sign warning that parking was meant for shoppers only.

Police and participants were seen stepping into air-conditioned Mariano’s for the store’s water fountain and other personal uses. Patrons were welcome. 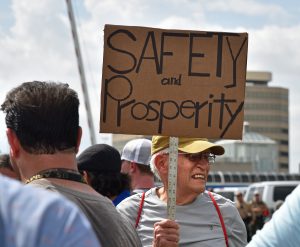 At the corner of Cumberland Avenue and Higgins Road, near the Kennedy Expressway, marchers gather on Labor Day, Sept.3, to protest violence. (Photo by Karie Angell Luc/for Chronicle Media)

A security guard stood in the indoor atrium at Mariano’s monitoring activity. Shoppers left with brown paper bags of groceries past the player piano that automatically offered background music to the local drama.

Customers, leaving with their shopping carts, spoke to other shoppers past the exit, many seen scanning protesters who walked along Higgins Road holding signs.

Police had sectioned off a portion of the Mariano’s parking lot with yellow tape. There, water bottles and ice were on standby under a tent to likely keep officers hydrated in the hot and humid weather.

Along the ramp, one protester who queued to prepare for arrest, said he had already retained an attorney.

To anyone listening, “We gotta wake Chicago up to what’s going on,” the man said.