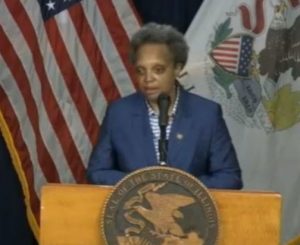 Chicago Mayor Lori Lightfoot speaks during a news conference Sunday in Chicago to announce the deployment of 375 Illinois National Guard soldiers to the city, where there have been protests this weekend over the death of George Floyd in police custody Monday, May 25, in Minneapolis. (Credit: blueroomstream.com)

Gov. J.B. Pritzker has activated 375 Illinois National Guard soldiers for State Active Duty to assist the Chicago Police Department in dealing with protests happening around the city for a fourth straight day.

The Guard will carry out a limited mission to help manage street closures and will not interfere with peaceful protestors exercising their first amendment rights, according to the governor’s office.

“At the request of Mayor Lori Lightfoot, I am activating the Illinois National Guard to support the City of Chicago in protecting our communities and keeping people safe,” Pritzker said in a statement released Sunday. “This is an immensely challenging moment for our city, our state, and our country, one born from decades and centuries of systemic racism. To those peacefully expressing the pain, fear, and rage of this moment, I hear you. Your voices matter. We must address the profound injustices in our society and bring about real and meaningful change.”

Lightfoot orders curfews after day of clashes between protesters, police

The events in Chicago are part of a nationwide movement of protests — many turning violent — that erupted in wake of the recent death of George Floyd.

The Minneapolis man was in police custody when he was apparently choked to death by a police officer with three other officers present.  The incident was captured on video by passersby.

The officer who had his knee on Floyd’s neck when he died has been charged with third degree murder and manslaughter.