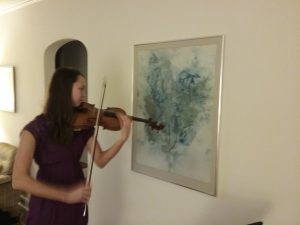 While other first-grade girls’ Christmas lists in 2007 had Barbie Girl, a doll and mp3 player all in one; and the Hannah Montana Singing Doll and Pop Star Stage on them, Sophia Kreider was making another request.

“I remember in first grade, I asked for Christmas that I wanted to play the violin,” the Oak Park-River Forest High School sophomore remembers. “I had a friend from dance who played violin.”

Already playing the piano, Kreider went to her parents with the request.

“I think it was because it was a different instrument,” she said. “My sister played piano so I wanted something different.”

Looking to blaze her own trail as a first-grader may have been the best thing for Kreider and classical music fans throughout the Chicago area.

Now at the age of 14, Kreider is already an accomplished violinist, having performed more than 50 concerts. She will take the stage Sunday at Dominican University to perform with The Symphony of Oak Park and River Forest. Kreider was the winner of the symphony’s Concerto Competition in January.

She will be performing Lalo’s “Symphonie espagnole mov’t I,” with the symphony behind her as part of the concert, which is at 4 p.m. Sunday in the Lund Auditorium of the Dominican Performing Arts Center, 7900 W. Division St., River Forest.

Her parents opted to have her do both violin and piano in second grade, fearful that the violin was that shiny new object that would draw her attention for a short time but then be discarded.

By third grade, it was just violin for the River Forest resident.

When she got picked to be part of the Chicago Youth Symphony Orchestra in sixth grade, Kreider realized that she might have some talent in what she was doing.

“I was concert master multiple times,” she said.

She has been part of the Youth Symphony for five years and is part of a CYSO group that will spend part of next summer touring central Europe.

She spends about an hour a day practicing her craft, balancing that with homework and being a tennis player in the fall for OPRF, having made it to state in doubles.

Kreider was part of a free open rehearsal of the symphony’s planned performance last week at Frederick Douglass Academy High School in Chicago. The academy is implementing a fine arts program in its school next year and the performance was an opportunity for parents to see what the possibilities are with such a program.

She has to remind herself to stay steady when performing, to not let herself get nervous, which can impact a performance.

The OPRF student said she loves being able to share her love of music with peers and audience members at concerts.

“Music is so important to me,” Kreider said. “It is fun for me to go out and perform.”

Although an accomplished musician, Kreider is considering just minoring in music at college. Already looking at schools such as Yale and California Institute of Technology, she wants to be a doctor.

The youngest performer as part of Sunday’s concert, Kreider said she just wants to enjoy the moment.

“It is a great feeling to be on stage, to share the stage with other performers,” Kreider said. “To have other people remember your performance is amazing. So few people get to play in concerts.”

A fan of Tchaikovsky, Mendelssohn and Beethoven, Kreider was a 2017 participant in the Illinois Music Education Association’s All-Star Orchestra. She also plays frequently at First Presbyterian Church of River Forest.

Her father, Kent, said he is proud of what his daughter has accomplished on the classical music scene.

“She is a hard worker,” Kent said. “We never have to tell her to practice … She has an ear for the music.”